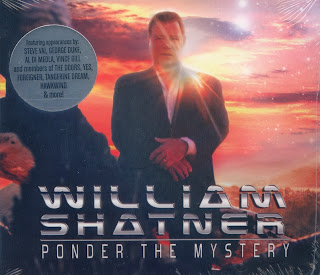 What makes William Shatner a musician to be taken seriously? The brilliantly done Priceline commercials of years past brought forth the idea that William Shatner, under it all, is a man of many talents being a remarkable actor, and I also conclude, a closet musician. Having the charisma, an automatic frontman. Words are his craft. Shatner's acting skills enabling him to deliver them in such a way that makes listening to any William Shatner musical recording a unique experience. Bill's been in the musical arena before. We all have our favorites. Time to re-evaluate, for Cleopatra Records brings us a William Shatner record like no other previous William Shatner musical endeavor has gone before.

Got to hand it to them, Cleopatra Records knew a logical match when they had one: William Shatner and Prog-Rock music. Shatner being a spoken word artist is one way of going about it. No matter the result, always entertaining. I like the format. Shatner's taken advantage in the past with some excellent self-parody / satire performance bits / routines.

Now enter Billy Sherwood, a multi-instrumentalist and a genius in a recording studio. I got turned onto him years ago when he had a band going called, World Trade. From there Billy worked with the newly nominated for the Rock and Roll Hall Of Fame; Yes. As time went on Sherwood gained experience by not only being involved with his own music, but by also producing / playing on tribute albums. That exposure in part, is what makes Billy Sherwood so successful today. He's the only man in prog-rock today that's busier than Steven Wilson. On top of all what has been already mentioned, Billy makes guest appearances like on this year's Sons Of Hippies - Griffons at the Gates of Heaven adding incredible keyboard (Mellotron / Moog) work to the band's already ultra groovy sound.

(Note: Sons of Hippies is a cool rock band from Tampa Florida that Uncle G just so happens to like and is also on Cleopatra Records).

Having given Ponder The Mystery repeated plays, I conclude Shatner's newest adventure away from the acting world is not only a whole new listening experience, but an immensely enjoyable one at that. Frankly, that surprised the shit out of me (I tease). What I can figure out is that Mr Sherwood produced a William Shatner recording where he lets Mr Shatner do what he does best: be William Shatner. On Ponder The Mystery he's more than just the star, for he's part of the creation process as well. This makes the words Mr. Shatner recites more personal, so therefore I imagine easier to get into and perform. From there, Mr. Sherwood mixed in the rest of the essential prog-rock ingredients for a prog-rock album fans of both Shatner and prog-rock can get into.

To make a top-notch prog-rock album, once you have your lyrics and concept of what the project is going to be, you need top-notch musicians. Providing the foundation / structure musically for this 15-track recording is the already mentioned Billy Sherwood. Dude's a steamroller nowadays pounding out one Cleopatra Records project after the next. Get this...on Ponder The Mystery, Mr. Sherwood is credited with background vocals, drums, acoustic & electric guitars, bass, and keyboards. Sherwood doesn't play just three chords on the guitar, the man's a virtuoso at any instrument he picks up. All his work is extraordinary, with his drum skills really standing out on this project. Weird for me to say because Billy can kick ass on all the other instruments I mentioned. He's just not known as a drummer, for he's seen more often playing bass than anything else. His bass playing is more along the lines of some of prog-rocks best bass players such as Chris Squire or Greg Lake.

William Shatner's Ponder The Mystery starts off with  a cool instrumental called "Red Shift".  It's all Billy Sherwood!! With a mellow ending, it bridges into track two's "Where It's Gone...I Don't Know". This song sets the pace for not only introducing the perfect mix of Shatner's narrative with Sherwood's singing, but for guest players as well with this track including Mick Jones on guitar (The Clash).

Additional highlights for me worth mentioning include the title song, "Ponder The Mystery". The guest player is none other than Steve Vai, whose guitar work is very similar to his work with David Lee Roth. It's not the first song on Ponder The Mystery that stuck with me as I went through the process of this review. The following song does as well: "So Am I". If you're a dog lover, Shatner's words will move you for sure. His delivery is heartfelt.

Track Six is entitled "Change". On keyboards is Mr. Rick Wakeman. Considered one of prog-rock's best and most influential piano / keyboard players. The song itself capturing a hint of Wakeman's "No Earthly Connection" (1976) and containing yet another spectacular solo.

"Rhythm Of The Night" is classic Shatner. It's nicely paced. It's catchy. Again a fine mix of words / singing. As a matter of fact, Shatner's presentation really shines here. Ditto is track thirteen called "I'm Alright, I Think".

Towards the end of the disc, there is a nice mellow piece called "Where Does Time Go?" It is sadly the last performance of the late and great George Duke. Worth the price of the CD all by itself.

Rating: Using the one to five star rating system, Uncle G gives William Shatner – Ponder The Mystery, 5 stars. Main reason is because it far exceeds what I thought it was going to turn out when I first heard of the project. But I remained open-minded, for I liked and respected many of the artists that this project is associated with. Together William Shatner and prog-rocks finest go together not because they all dig outer space, but because science fiction and prog-rock both allow the artist more freedom to express themselves.

I close in saying publicly how much I admire William Shatner's ability to go forward with zest, from one project to the next. Now, may I remind you Shatner is in his early eighties,and he's hanging out with guys that played with Yes and The Doors. Something tells me Cleopatra Records will be interested in a follow-up soon. That's not a mystery even worth pondering. It's more a given.