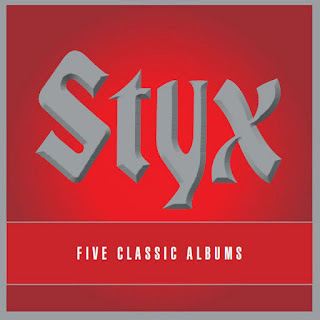 Styx’s five albums originally released between 1977 and 1983 through A&M are brought together in a brand new 5CD Classic Album Selection for the first time.

Styx are best known for melding the style of pop rock with the power of hard-rock guitar, strong ballads and elements of international musical theatre, with hit songs like ‘Babe’, ‘Come Sail Away’, ‘Blue Collar Man’, and ‘Mr. Roboto’. The band has four consecutive albums certified multi-platinum by the RIAA as well as sixteen top 40 singles in the US.

The Band still tour regularly and release albums under the leadership of Tommy Shaw and James "JY" Young. Bassist Chuck Panozzo occasionally tours and appears live with the band and  Dennis De Young now fronts his own band and tours and performs Styx material on his own