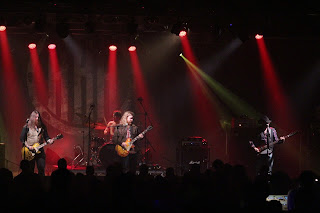 This weekend Thirteen Stars have released their new album "The White Raven"  a genuine milestone for fans of Southern Style Rock  but this is not a homegrown Southern US band  Hoss and the band are "good old boys" from the very North of England.  Geographically they may not be American but when they turn on the licks they certainly channel the south of the Mason Dixon line. The new outing is even  tighter than the previous  the  highly rated ` "Way Dyu" and it is a tad heavier in the bass line too. 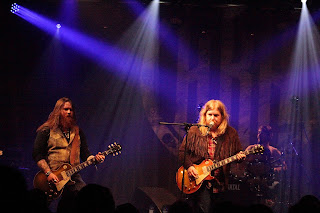 Jax and Matt without their customary headgear

Showing his true blues roots guitarist Jax Sedgewick slips in Keef Richards style   riffage  giving a very tasty vintage Rolling Stones  feel particularly on "Fools Heart" .  On other songs showing  a different style he's throwing in Ted Nugent southern fried  power chordage before delving deep into his gig bag for some decidedly funky riffs on "Breadline".  The percussion  and bass are taken care of  by Andy Bates and Matt Eden working very tight together  hitting the groove right down the middle, really great to hear two guys who are bolstering each others performance rather than competing . Hoss Thompson gruff vocals sound  those of a guy who has been smoking Marlboro for at  maybe forty some years ( I don't think he has really), deep melodic without pushing it to comic book American he treads the line of not sounding "too British" as the bands core content obviously demands and while he's doing that he plays some mean riffs on a still very new Les Paul. 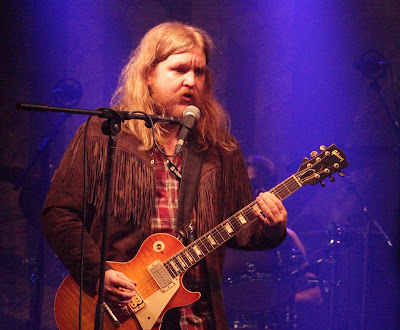 Hoss and that tasty Les Paul 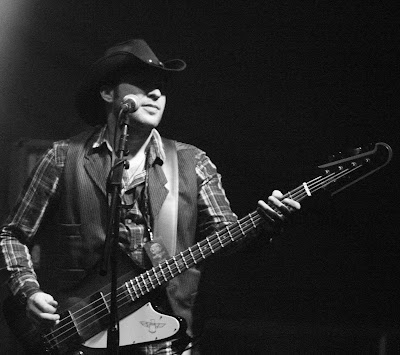 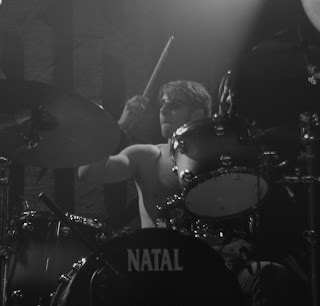 Andy secure in his drum castle


Though generally Thirteen Stars are bluesy they are often faster paced and certainly will tackle much more complex composition than traditional blues while still keeping quite light on the instrumental solos.  I've had 'White Raven' on heavy rotation and after around a thousand road miles I can set it firmly into the class of driving music I'll be hitting the road with it loaded come Monday morning . I regularly found myself tapping along  and it certainly does eat up the Motorway miles so I'd certainly recommend it for a Xmas gift . It is bound to please whether you want it for a friend who enjoys the styles of  Skynyrd or ZZ Top or The Stones or for yourself  dammed fine idea. Remember when Johnny Van Zant got together to form his band they wanted to be the US's Stones now the circle has come back round and we have a  band  that you might easily describe as England's Skynyrd in the same way a bit different but right on the money.
News for our friends in the US that Thirteen Stars are planning a pilgrimage to the US in 2016 so you could just get a chance to be the first to catch them rocking  in the South an occasion you don't want to miss out on.

Copies of "White Raven" are available from iTunes, Amazon and    http://www.offyerrocka.com/store.html?p=2

and naturally at Thirteen Star gigs details are  https://www.facebook.com/ThirteenStars/?fref=ts