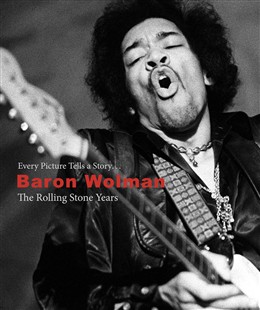 Baron Wolman: The Rolling Stone Years
Omnibus Publishing
Baron Wolman is a world renowned photographer and was the “Staff Photographer” for Rolling Stone for three years from the magazine’s inception in 1967 until 1970. During that time of course Rock music came of age and baron was lucky enough to be there and capture many artists making musical history at that time.
This book however is not just a collection of photographs put together in a book Oh no. Far from that there has been a lot of thought gone into the design and the flow and feel of this book with baron contextualising the photographs and telling a little story to illustrate the background of the photograph and how it came to be taken. It must also be said that Baron Wolman has that rare thing and something that is a God given talent and that is an eye for a picture and a talent for knowing when to capture “That Moment”
For many it will be all about the pictures and there are many amazing pictures contained within this book, but for me and many others I want to read about the circumstances in which the pictures were taken. What were the band like, what were they saying, how did they feel? You get all this from the photos and of course Baron’s text just brings the photo to life.
I have so many favourites in this book but for those looking for “The Moment check out Pete Townshend in performance with that look in his eyes that says”I hope you got that”. Another favourite and almost iconic photo is the set of pictures taken of Pink Floyd during their first tour of America in 1967. We see Baron has captured an amazing photograph of Syd Barrett with sugar cubes in his mouth! Quite a photograph I am sure you will agree.
This book however is an absolute treasure trove of images which form a part of history and without people like baron Wolman being there to capture that piece of history the world would be a very dull and uninteresting place. These photos contained in the book tell a tale from the early days of rock music a tale which anyone remotely interested in music will want to see alongside Baron's first-hand account of the magazine's early years and his memorable encounters with the rock stars of the day many of whom are now music legends.
Baron Wolman Interview Here: