Even people living in caves have heard of Alice Cooper such an icon of Rock and Roll who seems to have been about forever (certainly since I was at school which means much the same thing). The man and the band know how to put on a show that pleases just about everybody, the over the top theatrics and costumes are so much a part of it but with such a massive catalogue of songs they could just stand still and play all night. 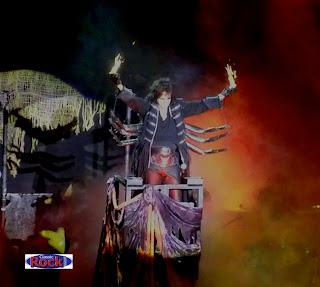 Not good enough for the Coopers though for the full on experience you have to have monsters zombies explosions and graveyard levels of mist . Also amazingly a new song (from the new album) subtly introduced by Alice wearing a jacket sign written 'New Song' the title "I'll Bite Your Face Off" and very much as you'd expect in the Alice style it rocks like Vannesa Feltz stood up in a canoe.

The favorite songs were delivered in true Coop Halloween style opening with The Black Widow complete with spider jacket segued into Brutal Planet driven hard, The spectacle of Feed My Frankenstein accompanied by 12 foot high reanimated monster terrorising the stage and chasing away Alice. Later during Billion Dollar Babies the generous Alice distributing Alice Dollars from a sword flourished about across the audience. 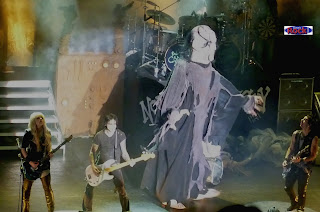 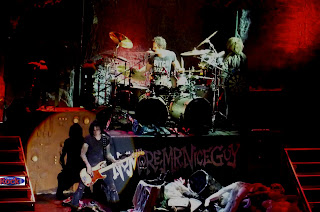 An unexpected highlight was a tour de force solo with powerful drummer Glen Sobel right at the top of his craft throwing sticks yards into the air midway through and never missing a beat .

I have also to mention Orianthi drop dead gorgeous lead guitarist as a counterpoint to the evil/naughty Alice she is not there just in a beauty and the beast role, what a player I found myself watching her hands as she shredded solo before 'Only Women Bleed' ( you can see what I mean on You Tube ) . If you couldn't make it then tour footage is well covered online but I understand there are still tickets available as the band head for mainland Europe during November and heading back to the US from the 26th. 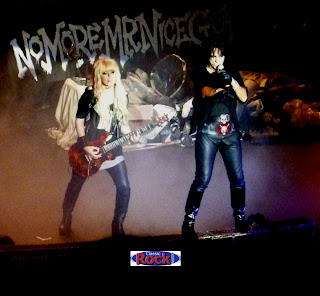 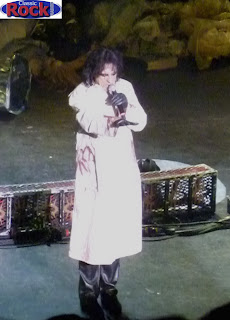 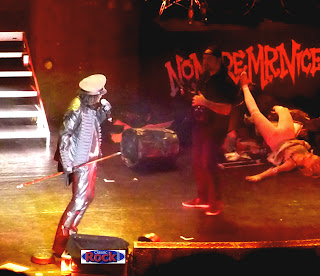 Definitely a thoroughly enjoyable night out with assorted ghouls and sundry creatures all dressed up to add to the merriment
Posted by Derek Watts at 14:37

Email ThisBlogThis!Share to TwitterShare to FacebookShare to Pinterest
Labels: Alice Cooper Live In Manchester, Welcome To My Nightmare II