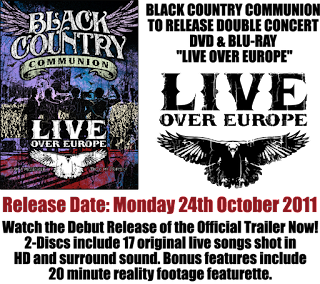 Hands up all those who thought that Black Country Communion were a one shot deal and that once the first album was out then the band would just fall by the wayside and the members would just continue with what they were doing before. Well I have to admit that I too had that feeling having seen this kind of thing before but I am happy to say that not only have the band managed to get over the difficult second album which most bands like this really struggle to release, they have also toured and the future looks good for all concerned not least those of us who absolutely adore what this band does

Filmed during the band’s debut European tour Black Country Communion Live over Europe finds this band ready to kill straight out of the box. If I am honest I am absolutely floored by the power the dynamics and sheer presence of this band. It isn’t a bunch of individuals out to make a quick buck this is a living and breathing band and live they excite me like very few bands have managed to do over the last few bands.

The great thing about this DVD is of course the music and the band feature music from both the albums currently available and of course we also have a knockout version of Burn which despite of course being a cover is really a major highlight of the bands set. Other musical highlights are frequent throughout this DVD and I have to say the material in a live setting really does shine tracks like One Last Soul, Save Me and Black Country just blow you away but the entire set is just full of great rock songs.

The other thing that I have noticed here is that the band can cut it both on a small intimate stage and also the big stage. Very few bands can make the switch so easily One of the few that I know of is The Rolling Stones so Black Country Communion are in elite and hallowed company . Wherever you see the band and if you caught the band on their UK tour or in Europe this DVD will be a great reminder of just how good this group of musicians are. Is there a star in Black Country Communion? Are you kidding of course every member of this band is a star but the amazing thing is they are a “BAND” there are no egos here just pure confidence in what they do. Glenn Hughes says in the DVD that they are “Just a Rock n Roll band playing Rock n Roll Music” Yes Glenn you are but BCC ARE SPECIAL!

The DVD package comes as a two disc set and the first disc will be on permanently play in my house until the band tour again.
Disc two is where you find the extras which include a featurette of the band on tour making this concert film and also includes photo galleries both on tour and backstage. In short if you have the two Black Country Communion CDs then you will want and indeed NEED this DVD [package it really is indispensable. I haven’t been as excited about a band for an absolute age but Black Country Communion excite me no end. They are the real deal!!

You can check out the bands facebook page for a look at the trailer for this film and also a chance to download a track Song of Yesterday free of charge.
https://www.facebook.com/bccommunion?sk=app_103520946352747
Posted by Jon Kirkman at 11:10