The Faces: Had Me A Real Good Time 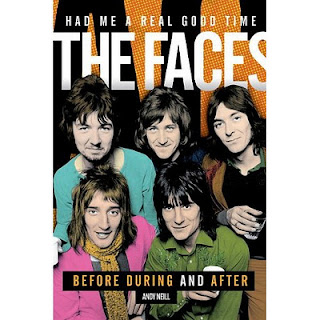 The Faces: Had Me A real Good Time
Before During and After
Andy Neill
Omnibus Press


If ever there was an appropriate title for a book about the Faces then had me A Real Good Time is it!

The Faces were known as one of the live bands of the era between their formation in 1969 and their sad demise in 1975 when Rod Stewart finally did what many thought he would have done for the previous few tears and went solo.

This book is a real page turner and if I am honest I am not surprised by that bearing in mind that every member of the band is a major personality. It could be said that no band could ever hold that group of personalities together but for the majority of the time the band were together it did work really well

Andy Neil has written probably the definitive account of one of the few bands to rival the Rolling Stones not only for great performances and records but also wild behaviour. Ian McLagan always carried an axe with him on tour for instance because he demanded that the band had a Steinway piano onstage for any concerts. On one occasion he thought the promoter had not provided the said piano and thus reduced the piano to matchwood. Sadly what he destroyed was a vintage Seinmeg piano which was an early Steinway. Of course he feels remorse for that now but at the time that seemed to be the way the band was and the Faces certainly pulled no punches when they were on tour. Everywhere the band went they certainly had a real good time. Sometimes it must also be said that others not involved did not have a real good time but such is life if you are a "civilian" who unfortunately manages to be in the same hotel as a band on tour.

The book takes you through the pre Faces period with Rod and of course the guys with the Small Faces and then through the glory years and finally the dissolution of the band which ended in a wholly unsatisfactory manner in the press. There are also excellent profiles of all the members and their take on the band and its influence
The story however doesn’t end there and over the years there have been attempts at reunions until more recently Rod finally couldn’t commit which forced the remaining members Ronnie Wood, Kenney Jones and Ian McLagan to recruit former Sex Pistol Glen Matlock on bass and more surprisingly former Simply Red vocalist Mick Hucknall. Despite reservations from some of the press however it actually works really well.
For any fan of the band this book is as I say definitive and it is packed full of information as Rod Stewart has indicated himself which as a recommendation can’t be bad.

What it will do as with any good book about an artist will drive you to the albums the artist made and in this case the Faces are waiting to be either discovered or maybe rediscovered. Whatever it is I guarantee you will not be able to put this book down so break open a bottle of Mateus Rose stick Ooh La La on and settle back to a good read. You will laugh out loud and also maybe shed a tear or two; the book really is that good.

You can buy the book directly from Omnibus Press here:

You can request faces tracks on Classic Rock radio Here:

http://www.classicrockradio.eu/playlist/playlistA.html
Posted by Jon Kirkman at 11:55