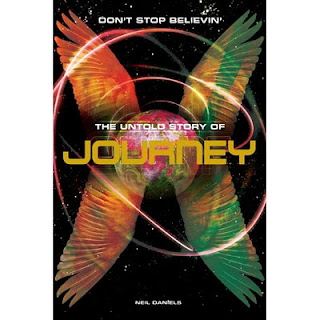 Unless you have been hidden up a mountain for the last thirty years you will know that Journey are one of America’s biggest rock bands with an amazing amount of Platinum and Gold albums behind them not to mention concerts that have attracted hundreds of thousands possibly millions of concert goers over the years.

In the UK the band have always been a popular draw on the live circuit however albums sales have somewhat predictably fallen a little behind the American market. That is until the producers of the television programme Glee decided to include the song Don’t Stop Believin’ in one of their shows. Hey presto the bands profile which was huge in America is now even bigger than before and the band have made the jump from theatres in the UK up to arenas and had a hit with their own version of the song which by and large is now recognised by almost everyone

Odd then that until Neil Daniels wrote this book that there had never been a book about this band and considering that the history of the band stretches back to 1973 and also includes connections with Santana and at one point the band featured a very well known British drummer. Hence no doubt the tag The Untold Story which in this instance is actually true.

In many ways this book then is well timed and is I am happy to say a really good read which takes us through the history of the band and the highs and lows and also I feel, fairly sets the story straight on the rather messy business of Steve Perry’s departure and the various singers who replaced him, something that some Journey fans still feel strongly about.

Until Steve Perry decides to write his own biography I guess what we have here will have to do although from what is written here Neil Daniels has recorded the facts pretty well and also fairly in my opinion and it has to be said that Steve Perry seems to have been treated more fairly than perhaps other ex members of the band according to the book.

The band is now once again selling huge amounts of concert tickets and with new singer Arnel Pineda selling albums in respectable quantities once more. The story of how Arnel came to be in the band is worthy of a book in itself!
So if you have ever been interested in Journey or whether the “Glee Effect” has brought you to the band no matter, this book will act as a reference and send you back to the most important thing about Journey; the music, which after all; is what it is all about. Whether there is another book on the subject of Journey is debateable however this book has set the bar pretty high and covers all the points and even throws up a couple of interesting facts that casual and even long time fans may not know!

Don’t Stop Believin’ is well researched and contains exclusive interviews with many former members and people who worked with the band which lends this book an almost “Official” feel to it.

You can buy this book directly from Omnibus Press Here:

http://www.classicrockradio.eu/playlist/playlistA.html
Posted by Jon Kirkman at 10:53