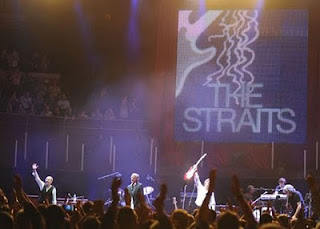 Encore
Money For Nothing
Portobello Belle

For many people one of the biggest bands not to have re formed over recent years is Dire Straits. There is of course Mark Knopfler who does play a few songs from a quite wonderful catalogue but until former keyboard player Alan Clark took the plunge and formed “The Straits” the catalogue remained relatively untouched.

The Straits are no tribute band however with Alan Clark and fellow former member of Dire Straits Chris White The Straits are quite simple wonderful. With front man Terence Reis filling the very big shoes left by Mark Knopfler the band has a very big future ahead of them. The full line up in Liverpool tonight includes drummer Steve Ferrone, bassist Mickey Feat, multi instrumentalist Jamie Squire and in place of Phil Palmer guitarist Adam Phillips and this band seriously deliver the goods.

Starting with a major surprise in Private Investigations which I thought was a strange choice but to be honest this had the hair on the back of my neck standing up. The dynamics were incredible and I soon found myself smiling to myself. Rather like seeing one of my favourite bands again after a long layoff “The Straits” kept that smile on my face for the next 110 minutes. The band had their first standing ovation with Telegraph Road (The first of many) with some amazing playing and soloing from Terence Reis and from that moment on the highlights just kept coming, song after song the band just kept delivering the killer punch.

My personal favourites? Well Telegraph Road was just incredible as were Romeo and Juliet, Tunnel of Love and Brothers in Arms. I have to also say that the band performed a couple of songs that did surprise me but in a really good way. I never thought I would hear Communiqué again or Iron Hand but Terence Reis once again delivered a great arrangement of Communiqué starting off as just a solo song with the various members joining in along the way including some tasteful slide guitar from Adam Phillips; absolutely fantastic.

The evening ended with an extended version of Sultans of Swing and then the encore followed with of course Money for Nothing and another surprise with Portobello Belle.
The band has plans for next year including dates in Europe, America and even Australia. They have also assured us that they are going to come back and play the UK again so with that in mind I urge you to catch them next time they tour.

With this band I have to say there is every chance that this band could do incredible business and with Terence Reis they do have an incredible ace up the sleeve. Don’t run away with the idea that it is a one man show however all the members sound incredible and Alan Clark has put together an amazing band more than capable of delivering the classics and hopefully new material.

Never mind Love Over Gold. The Straits are PURE GOLD!

www.thestraits.com
Posted by Jon Kirkman at 09:50