In The News_Kanye West FLIPS OUT on Bob Ezrin 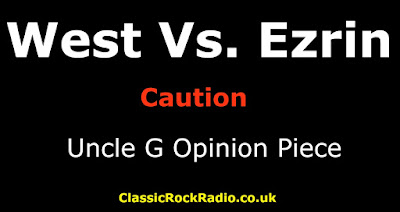 So all hell broke loose in pop culture land yesterday after rap artist Kanye West found out about remarks legendary producer / musician Bob Ezrin made about his music, comparing Kayne's catalog of work to others in his field. You want the short form, I'll paraphrase; Kayne SUCKS! My conclusion after reading Bob Ezrin's remarks about the current music scene, in which Bob still has an active part in; Hollywood Vampires (producer). BTW … The Hollywood Vampires, a new hard rock super-group lead by the one and only Alice Cooper, just recently kicked ass at the recent Grammy awards. Was lucky to have watched their performance live when broadcast on national television. They truly ROCKED! Included a very cool tribute to Lemmy Kilmister also. And who knew Johnny Depp could play like that? Well I knew, but I'm guessing more than one in TV land while viewing, said that.

Back to Kane West. I understand his right and need to reply to Bob Ezrin's in a way, scathing comments. Personally I didn't find anything in what Bob's being quoted as saying, and not an imposter, as wrong. It's his professional opinion, based on his work in the music business since before Kayne West was even born. And it isn't like Bob is losing touch, and comparing anything Kayne does to something from the twentieth century. Mister Ezrin based on what I read, is more knowledgeable on today's music scene, than I am, when it comes to rap / popular music. The man knows his stuff, and can give a very good argument, if needed to. Problem is, Kayne in response is yet again acting like the man-boy he comes off as. And that's my opinion, not Mr. Ezrin's.

Bob Ezrin: "Sure, he made some great music for himself and others. But in spite of what the aspirationally-cool media keeps saying about him, unlike other creators in his genre like Jay Z, Tupic, Biggie or even M.C. Hammer for that matter, it's unlikely that we'll be quoting too many of Kanye's songs 20 years for now. He didn't open up new avenues of public discourse like NWA, or introduce the world to a new art form like Grandmaster Flash, or even meaningfully and memorably address social issues through his music like Marshall, Macklemore and Kendrick"

Bob Ezrin described Kayne West production skills as; "Pale in comparison to the likes of Timbaland and Rick Rubin."

Bob Ezrin concludes: "Instead Kayne's greatest achievements have been in the form of excessive behaviour, egomaniacal tantrums and tasteless grandstanding."

Bob Ezrin: "He's like the flasher who interrupts a critical game by running naked across the field. Is that art???"

Meanwhile it's almost midnight in TwitterLand

Kayne West: "Has anyone ever heard of Bob Ezrin???"

Kayne West: "What the fuck does he know about rap..."

AND THEN IT GETS REALLY PERSONAL

Kayne West: "Your kids are ashamed of their dad...Sorry for speaking about kids...but you imagine if you were Bob Ezrin's kids"

Kayne West: "Ezrin I truly feel sorry for your friends and family that they have had to suffer an idiot like you for so many years."

Damn! WTF? The recent Kayne West / Bob Ezrin stories that are in the news, caught my eye. Figured I'd put in my two-cents.

First off, and it comes with the territory of giving opinions. If on the negative side, one usually will get a response. Kind of 50/50 as to what it will be. People will either agree, or disagree. Need I remind everyone of the saying; opinions are like assholes, everyone's got one. So with that, long time music producer Mr. Ezrin did open the door on this. I'm guessing he knows his subject's reputation, pretty much predicted the response he would get, not only from his target of critique, but the man's followers as well. I'm sorry to say it involved personal attacks. Nothing in which I approve. At the same time, pissing off the rock n' roll community isn't a very good idea. Bob Ezrin has a lot of people out there who LIKE him, including myself, for I have been aware of this man's career since being a young teen.

For Kayne West, the timing here could be better. I understand he has new music that either has or is about to be dropped. Something like this, could actually affect sales. Also Kayne has a clothing line that is in some kind of financial hardship. A recent tabloid / news headline stated he was millions of dollars in debt. Now add a wife that is said to have publicly questioned his sanity. All I can say is the dudes drama's even worse than mine lately, and that's saying something.

Before I'm reminded, it's on public record that I praised Kayne West at least once or twice, since I been writing for Jon Kirkman's Classic Rock Radio (Dot CO Dot UK). I'm not now denouncing any of that. Kayne was one of the performers that volunteered his time at a concert to help Hurricane Sandy victims at MSG in NYC, a few years back. Now here's when I had an opportunity to hear Kayne's music. Wasn't typical rap. More artsy-fartsy in my mind. What I heard matched Kayne's persona. A mostly rock n' roll crowd, lots of people in the audience didn't dig it. But they were polite. I was curious at the time to see / hear Kayne perform live. Frankly it was nothing I could get into. The second time I said nice things, Kayne worked with Sir Paul McCartney. I thought that was cool. Again, kind of artsy-fartsy. One could conclude with me, that I didn't outright hate the guy. As I don't think Bob Ezrin does either.

In closing, if I was Kayne, I would just regard what all Mr. Ezrin said as hard constructive criticism. From someone in the music business just like himself. Has out sold Kayne I'm sure. Out produced … read who produced Pink Floyd's mega-seller; The Wall. Just one example. And Bob's a talented songwriter / keyboardist as well. I always dug his work on Alice Cooper's Da Da, and just a few years back while talking about Alice Cooper, produced 'Welcome 2 My Nightmare' (2011), in which Alice charted in the Top 25. First time Alice did that since 1989's 'Trash'. Included original members of Alice Cooper, which of course I'm certain, helped the cause.

To Kayne: The fanbase luv's you, and I'm assuming like many other performers followers, never really wholeheartedly mention to U that you might be going down the wrong road. Instead they wants pictures and autographs. People on your payroll don't either. Sure it wasn't asked for, but at this point, what are you going to do? Yesterday is behind you. Maybe you don't realize, but in rock n' roll circles, having Bob Ezrin produce your new record, is akin to having The Beatles Sir George Martin doing so. Are both exceptional at what they do. Just take my word for it. You'd be lucky to work with either of them. Instead of the typical childish behavior you routinely exhibit, may I suggest acting like a man, and having some fucking manners; "THANK YOU SIR." Granted being schooled publicly is humiliating. I suggest moving on. Could be the best damn thing to EVER happen to you.