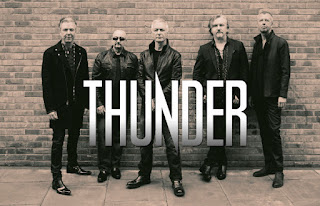 
The Steelhouse Festival [The Welsh International Classic Rock Festival] now in its sixth consecutive year, is delighted to be adding Thunder as the headline act for Saturday night.  Thunder will join a great line-up performing on the weekend of 23 and 24 July 2016 at its spectacular and unique mountain-top location.  Other confirmed acts include The Darkness, The Dead Daisies, Blues Pills, Ginger Wildheart’s Hey! Hello!, Von Hertzen Brothers, Vega, Dirty Thrills and Hand Of Dimes with many more to be announced.

Danny Bowes of Thunder said, “We’re looking forward to playing at Steelhouse. The Welsh audience is always mental, it will be a fantastic show”.

Promoter Max Rhead said, “We’re incredibly pleased to have Thunder join us at the Steelhouse this year. We’ve been speaking to them for the last 3 years about headlining, and finally everything has fallen into place. Whenever the subject of who should appear at the Steelhouse is raised, It’s Thunder’s name that is overwhelmingly at the top of the list. I really can’t wait to welcome Danny and the boys to the top of our mountain.”

Officially the UK’s highest music festival, The Steelhouse Festival will once again be held in the spectacular surroundings of the southern edge of the Brecon Beacons, and bring the finest classic rock artists to the heart of the South Wales Valleys.

Aiming to be the UK’s best value rock festival, this family friendly event has built up a true following and a real heritage of its own over six successful years.  Previous performers at The Steelhouse Festival have included UFO, Europe, Y&T, Blackstar Riders, Sebastian Bach, Saxon, Anvil, Michael Schenker, Doro and Dee Snider.  Don’t missThunder and the rest of this great line-up this year as The Steelhouse Festival legend goes on!
Posted by Jon Kirkman at 01:47