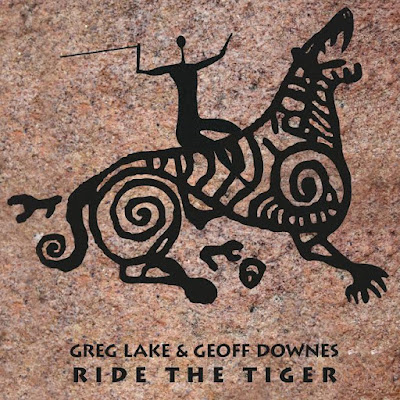 Greg Lake and Geoff Downes 'Ride The Tiger', is a project I heard about for some time now. Was teased a bit back in 2010 when Greg Lake released an archival recording called; Greg Lake - From The Underground Vol. 2. The release contained three original songs the guys recorded a couple decades ago from the Ride The Tiger sessions (1989 / 1990) which to my knowledge, was never officially released up to that point. Word did get around the project. The Prog-Heads were indeed interested. The recordings were much sought after in collector circles.

People who listen to 24/7 Internet classic rock stations like the one I write for, have the pleasure of hearing Greg Lake's vocals everyday. If not a song from King Crimson's famous debut album, or from Greg's own solo albums, than my money's on it being a ELP hit. Maybe a deep cut from the Emerson, Lake, & Palmer catalog? One I dig is called; Trilogy. Or how about one of their greatest hits; Lucky Man? Whatever it is, I'm sure whoever is within earshot, will be entertained.

Geoff Downes (piano / keyboards) came to fame with what was to become the first music video ever played on cable tv's, MTV. The song; Video Killed The Radio Star. Was Geoff and Trevor Horn in a band they called; The Buggles. From there the two musicians joined prog-rock's Yes. After that, Geoff and legendary Yes guitarist Steve Howe, moved onward to a modern prog-rock band still going strong today called, Asia. And that is where Geoff got to know co-founder of King Crimson / Emerson, Lake, & Palmer; Greg Lake. Was a period of time when John Wetton wasn't in the group. The vocal, bass, frontman job mostly filled by John Payne over the years, but before him, it was shortly filled by Greg Lake. In my opinion, a very interesting period of time in Asia's timeline. The MTV concert from Japan with that four man line-up, really smoked. Because of that happening, years later Greg and Geoff had a reunion of sorts, and this is how we got the 'Ride The Tiger' songs. With this Manticore Records release, six song in total. And not a one called 'Ride The Tiger', by the way. Opening track, title number. Would have worked. Cool name for a song. Things never got that far I imagine.

The Greg Lake and Geoff Downes project, for whatever reason, just didn't work out. I for one personally wish it would have. Based on the material released on this CD I was sent, the proof is scattered all over. As a three piece with Michael Giles, in my mind this would have worked. My mind's eye could see a tour. The setlist to include not only original material, but songs from King Crimson, ELP, and Yes as well. The Japan crowds, especially would have ate that up. Big prog-rock fans in the land of the rising sun. The 'Ride The Tiger' tunes, more adult contemporary with progressive roots. That would have been be the market I targeted that at.

I luv the opener called; Money Talks. Rocks more than what was to be officially released as an Emerson, Lake, & Palmer song on their 1992 studio called, Black Moon. The song was retitled (Paper Blood) and given the ELP treatment. I dig both versions. When comparing, the Greg Lake & Geoff Downes version does rock more, and is tighter coming in a minute shorter. We're talking possible hit single. Could have carried the band / album. Should have gotten radio play (back when people listened to AM / FM radio stations). Additional differences when compared to the ELP version, is the sound of an electric guitar, and lyrics wise, we have a different chorus. Worth the price of the album / cd / download all by itself.

The second song is called; Love Under Fire. Was included on Asia's forth studio album; Aqua (1992). The singer at the time, John Payne, doing the song justice. Nice to hear Greg Lake's take. A strong rock ballad. Beautiful lyrics / instrumentation. An alternate mix version, closes out this CD. I tend to regard it as a bonus track.

Track three is another song that appeared on Emerson, Lake, & Palmer's Black Moon album called, Affairs Of The Heart. Another well done slow rocker. Still, I believe the Greg Lake & Geoff Downes version to be better than what's found on ELP's eighth studio album. For some unknown reason on the ELP version, a chorus line found in the Lake & Downes Ride The Tiger project is missing. Leaving that out made a difference.

Street War: This kicks ass! The mellow songs are cool, but it's the rock in rock n' roll that I like best. Street War is unusual, and in a good way. Has a hard rock edge. Sounds very sci-fi. Geoff Downes shines, as do Mister Giles, and Mister Lake. Totally unknown to me before I opened the Greg Lake & Geoff Downes 'Ride The Tiger' CD. CrazyAss rocker! I recommend the volume turned up on this instant classic.

The last two songs tend to be the weakest of the material presented. The song Check It Out, appeared first on Greg Lake's solo archival release; Greg Lake - From The Underground Vol. II. Even with not being that strong a song, it still showcases Greg's vocals nicely. Has a 1980's / 1990's sound to it. The song Blue Light comes next. Geoff Downes saves it with some cool keyboard work right at the end of the tune.

Using the one to five star rating system, whereas one star means you can skip it, to five stars meaning it's a must buy, I'd rate Greg Lake & Geoff Downes - Ride The Tiger … 5 stars! It's archival. I'm more harsh on new material. Released for long time fans like myself who simply can't be any happier that the Ride The Tiger songs were finally, properly all released. Should make the fans of the musicians involved, as well as ELP, Asia, King Crimson collectors VERY happy. Does me!

Note, a wise business decision to officially release. THANKS Manticore Records. U ROCK!