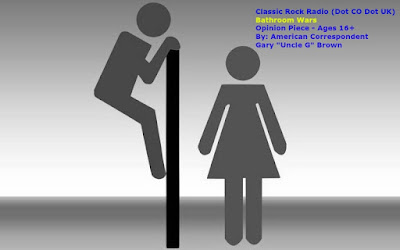 Hot in the news are stories about musicians, and those associated with the entertainment industry about bathrooms, charges of discrimination, and boycotting. Since some big name classic rockers have come out canceling performances because of this, I figured I'd throw in my two cents on the subject(s).

In one corner, transgendered / transsexual human beings trying to make life for themselves and others like them, more tolerable. I completely understand. Pertaining to the subject of having to eliminate waste, when the urge hits, it is my impression that Transgendered / Transexuals want the freedom to be able to use the ladies facilities when out in public, whenever mother nature calls. Problem is they still have a penis, because they were born male. They may look female, act female, and even talk like a female. Without clothing, and upon closer examination, doctors having all that schooling on the human body would conclude, they were male.

In the other corner, those trying to defend children and females from the mentally sick individuals who will stop at nothing to fulfill their own deranged sexual desires. Those who can possibly kill after having their kinks. Not all sex crimes are violent. Those are the ones we as a community should be aware of, and always try to prevent.

If a pedophile figures out all they got to do is dress the part to gain admittance so to sit in the next stall to little nine year old Susan who needs to go potty, finding this sexually exciting, they will. Here comes the dress, high heels, and blonde wig. What we have here is a wolf in sheep's clothing. Little Susan is prey.

Using this one example, I just identified a serious problem. But maybe it's not a pedophile, and instead it's a rapist. Or a pervert just looking to take pictures and run video of people going pee or poop, for either fun or profit? So I ask myself. I say Self; How can a rational thinking adult human not at least acknowledge that safety issues could arise should just anyone for any reason be allowed into male or female designated public bathrooms?

Some concerned men and women who, while trying to show compassion for the transgendered / transexual community, are putting their collective foot down on allowing men for whatever reason, access to a room in which females are in, to use a toilet. Allowing who they see as guys in women's clothing hanging out / sharing a bathroom with their moms, wives, daughters, and just females in general, is totally unacceptable. So strongly do they feel this way, that if provoked, violence can and will erupt. Just a matter of time. States have passed laws recently (Mississippi and North Carolina) or are considering to do so, that point blank say whatever your birth sex is, is what public bathroom you are allowed in...period. This angers others, including the President of the United States.

In my opinion, this has already gone seriously out of hand. The answer to this I believe, has actually been around for a few decades; Unisex Bathrooms. Also labeled; Gender Neutral Facilities / Restrooms. Not for all. I believe children / young adults (age 16 and under) should still have traditional boys / girls restrooms. And adults should realize before going in, what the word 'unisex' really means.

Of course businesses and those places open to the public could still have traditional Mens and Ladies' rooms, along with the Unisex ones. Problem solved. Those running a public business in the twenty first century need to understand, this is the way it is now. That only offering the traditional Mens and Womens Bathroom, just isn't enough. That's the way it was. Man up, swallow the cost, and do it. Sadly some will fight that to the end. There they go dragging their knuckles on the ground again. The truth is if wanting to compete for today's dollars, that it's time to update ones thinking, and get with what's going on in today's world. Although the count may be low, there are numerous of people in today's America that would feel at peace using a bathroom that had them in mind when designed.

Regarding Bruce Springsteen / Ringo Starr. Two normally, very cool classic rockers. Both have canceled appearances recently in states where they believe practices discrimination. Here's one law I would stand behind. After an announcement is made that so and so is coming to such and such venue, at such and such date and time, and one ticket is sold, from that point on, the show must go on. Am I wrong? Unless people for whatever reason could be in danger, or it's due to some unforeseen circumstance that could not be avoided; performer taken ill. What I'm saying is please cancel your shows if you MUST, for something legitimate, and not just a difference of opinion. Which is really what we have here.

In closing I'd like to say that I personally commend those who stick up for others, on both sides of this issue(s). Saying that I understand business is business, and in my opinion, boycotting is not the answer. When canceling a concert, a ton of people are affected. Financially punishing a State, is also punishing it's population, including the ones who make a living selling hot dogs and beer at your shows. Are they heterosexual, gay, transgendered, or transexual? Why not ask them what they think on the subject, before pulling the plug on what would been money well earned, and probably due to not being millionaires like y'all, money needed to pay bills, and for everyday expenses? I'm saying everyone loses money. Gone because of you taking a stand. Something that can still be done, before or after your performance. But please not during the show. Believe me, not all in the audience feel the same way you do about everything.
Posted by Gary "Uncle G" Brown at 16:39