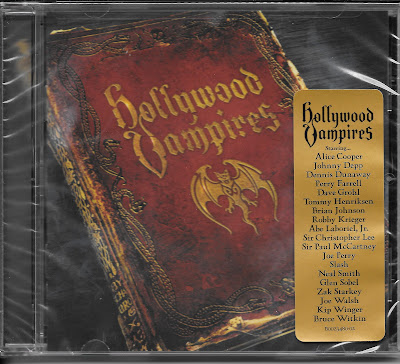 After Alice Cooper released the sequel to one of his most popular solo records, Welcome To My Nightmare (1975) entitled 'Welcome 2 My Nightmare' back in 2011, my hope was that it would be followed up by a tour. One that would include the three other original surviving members of Alice Cooper (1969-1974); Michael Bruce, Dennis Dunaway, and Neal Smith. Reason being because they were included on the Nightmare 2 album. Three different tracks. But that never happened. Instead Alice toured like he's done since separating from the original members of Alice Cooper, with his own band. In my opinion, the three strongest tracks on Nightmare 2, was the ones written and performed by the surviving founding members of Alice Cooper (RIP Glen Buxton), and performed again as a group. Their first time doing so since 1974's Muscle Of Love album. And not that the rest of 'Welcome 2 My Nightmare' sucked. The track, 'I Am Made Of You', contains some excellent guitar work by Steve Hunter, and is one of the best solo tracks in my opinion that Alice has done in ages. The album was touched on live, and that's about it. Next came talk of a covers record, in which quite frankly I really wasn't that excited about. Not until it expanded / grew into what we have today. The debut album of; The Hollywood Vampires.

The Hollywood Vampires self titled record that came out last September, is very much a Alice Cooper project. Produced by longtime associate; Bob Ezrin. The same man who dared recently to voice aloud what I thought was constructive criticism of rap music's, Kanye West. Of course that flew over like a lead balloon, as one would expect from Mister Kardashian, and his homies. Bob Ezrin, who was inducted into the Canadian Music Hall of Fame twelve years ago, is also a songwriter, and plays the piano / keyboards extremely well. On the Hollywood Vampires album, Mr. Ezrin plays keyboards / piano, gets partial writing credit for three tracks, does backing vocals, is credited as producer, and also gets partial credit again, this time for helping mix the recordings. A studio wizard, whose work and dedication to his craft helped sell millions and millions of records worldwide.

The idea for this concept album originated from what lyricist Bernie Taupin labeled a; "drinking fraternity". A bunch of famous guys who putting their celebrity aside, would meet up to see who could out drink one another. All heavy drinkers / alcoholics, whose reputation for partying preceded them. Didn't take long for the Grim Reaper to start picking them off, one by one. Not all mentioned in this tribute to their memories died because of a result of abusing King Alcohol. The Beatles, John Lennon for example, was assassinated by a crazed fanatic on the 8th of December in 1980. Rumor had it back in the day, John was capable of being a very sloppy drunk. Yet it's said the last five years of his life he spent raising their son Sean. Am thinking he didn't do so in a constant drunken stupor. One can conclude that if not for the asshole who shot him multiple times, that John Lennon might be still alive today.

Back in the seventies / eighties, I had my own battles with the bottle. Ends up some of us cleaned up our act some, while others unfortunately didn't. I loss my Mother who was a professional musician due to her drinking, when I was seven years old. Worked in bars. You'd think I know better, yet I went through and survived the DT's, back when I was just twenty four, after a decade of consuming any and all booze I could get my hands on. Withdrawal almost killed me. Made me learn to respect the bottle, and of course it's contents. Alice took on sobriety after damn near dying. Lucky for him because many try, and fail.

Starts off with a very cool spoken word track entitled 'The Last Vampire', by the late actor; Sir Christopher Lee (1922-2015). Both Johnny Depp (guitarist for The Hollywood Vampires), and Alice Cooper worked with him in the Dark Shadows film they did together back in 2012. One of my all time favorite movie actors. His body of work with just Hammer Studios is simply outstanding. Who else but he could take the role of Dracula made famous by Bela Lugosi, and profitably make it his own? The opening track ... 'The Last Vampire' ... excellent intro!

Next we get one of two original songs on the Hollywood Vampires album, called; Raise The Dead. Along with 'The Last Vampire' it helps set the tone for everything that follows. Here's the first track one gets to hear actor / musician Johnny Depp play guitar, and do backing vocals. That to me was a curiosity. My good friend Charles Zittle (drummer for Generation:landslide) informed me before I really dug into this release that Mr. Depp is actually quite a skilled guitarist, and was into playing guitar before becoming famous for his Hollywood roles. News to me. Listening to this album, I found what Charles told me, very much on the money.

Next comes eleven tracks of not just cover songs, but songs that speak the name(s) for whom they were picked. Every track is enjoyable to listen to. Some rock harder than others. Most of the compositions picked, people will recognize pretty quickly. Here's a few highlights:

01.) My Generation: Having The Who's drummer Zak Starkey (Ringo's son) playing drums on this track, is icing on the cake here. Always been one of my favorite Who songs. The song's a nod to the original Who drummer Keith Moon (1948 - 1978), who was a Hollywood Vampire back in the day.

02.) Whole Lotta Love: I always dug Alice's harmonica playing, and if you do too, then you'll seriously dig this track. Also joining Alice on vocals is former AC/DC singer, Brian Johnson. The Hollywood Vampires version of the Led Zeppelin classic, has five guitar players, and again we have Zak Starkey pounding the skins. On bass, Kip Winger. All involved make it one of the coolest covers, being that it's not an exact copy of the original. Dedicated to Led Zeppelin's John Henry Bonham who died of alcohol poisoning (1948-1980). Came close to doing that myself, more than once.

03) Come And Get It: Written by the Beatles Paul McCartney, and made a hit by the band Badfinger. Released in the States in 1970, it charted on Billboard's Top 10. This version is nothing short of being blessed, having Sir Paul's participation; vocals, bass, and piano. Sharing guitar duties; Johnny Depp and Aerosmith's Joe Perry. On drums, the very talented, Abe Laboriel Jr (Sir Paul's regular drummer). Hollywood Vampires producer Bob Ezrin joins in on backing vocals. Worth repeat plays for sure.

04.) Jeepster: A fun rocker credited to Hollywood Vampire Marc Bolan (1947 - 1977), and made a hit by the band, T Rex. Includes a standout performance by singer Alice Cooper, who by the way, shines throughout the album. Another feather in the cap for the long time musician. Already inducted in the Rock n' Roll Hall of Fame (Cleveland Ohio) for his work with the original Alice Cooper band, I say it's about time he was acknowledged for his solo work. Should be just a matter of time before we see him on the ballot again.

05.) School's Out / Another Brick In The Wall part 2: Amazing how closely School's Out sounds like the original. Seeing how aging didn't change anything, we have three other people who participated on the 1972 hit School's Out, involved here; Dennis Dunaway (bass), Neal Smith (drums), and producer Bob Ezrin, who helps out here musically along with Kip Winger doing backing vocals. A tribute to Glen Buxton, original lead guitarist for Alice Cooper who passed away back in 1997. Noticeably absent from participating on this Alice Cooper group reunion; Michael Bruce. Main songwriter, rhythm guitarist, and keyboardist for the band. Still very much alive, and who recently came out retirement debuting his new band; Michael Bruce Force. Note, I believe it's Michael that is referred to in the last page of the Hollywood Vampires booklet that comes with the CD. Found listed with a bunch of other names under; "Johnny and Alice wish to thank." It's reads; "Mike Bruce". Those who know Michael, know that he seriously dislikes being called, Mike. So perhaps a typo, or maybe it's another person entirely? Regardless, always nice to at least hear Mr. Dunaway, and Mr. Smith on a record that includes Alice again.

Pink Floyd's mega hit 'Another Brick In The Wall part 2', gels perfectly with School's Out. Alice has been including the mix (School's Out / Another Brick In The Wall part 2) in his live show for some time now. A natural to appear on this record. The Pink Floyd number, a tip of the hit I imagine to deceased Pink Floyd members, Syd Barrett (1946 - 2006) and Richard Wright (1943 - 2008). Guitarists on this track include Slash, whose a long time Alice Cooper fan.

Original Track - My Dead Drunk Friends: Over four minutes, this is an excellent closing number. Just as the first two tracks did their job setting the scene, My Dead Drunk Friends, does a superb job ending the album. Containing a serious message in it's lyrics, the song takes a more humorous approach in it's delivery, both lyrically and music wise.

Using the one to five rating system, whereas one star means it's downright horrible, to five stars in which means one is safe to spend their hard earned cash on it, I rate The Hollywood Vampires debut album … (a Neal Smith drum roll please) … 5 stars!

For a mostly cover record, this kicks ass! Due to it's storyline / presentation, it's not just another "tribute" / "cover" album. Is a wonderful introduction to the group.

The live Hollywood Vampire shows critiqued by critics and fans alike that I have read so far, have all been good. The band smoked on television debut at this years Grammy's. The group played a new song called, As Bad As I Am, that comes with the new deluxe version of the Hollywood Vampires album, and as a tribute to Motorhead's Lemmy Kilmister (1945 - 2015), the Motorhead song, 'Ace Of Spades.'

In closing, my hope is to see another Hollywood Vampire album follow. A super group for sure, even if hard to get everyone together, the effort I'm sure would be worth it. A mixture of cover / original material would be fine. And I'd also like to see these guys live. Catch them on the road if you can. Should be a solid night of entertainment / hard rocking.

For additional information on The Hollywood Vampires, please check out their official website @ www.HollywoodVampires.com
Posted by Gary "Uncle G" Brown at 14:21