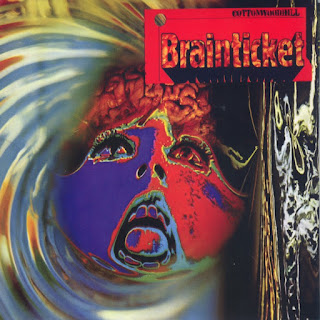 I sure wish I would have heard of Brainticket a lot sooner than a week ago. That's when I busted open the beautifully done re-issue of the very first Brainticket release Cottonwood. Originally put out forty years ago, now on CD and looking as good as ever. Hard to believe the album was banned in various countries including America. This could explain why it took me longer than usual to get turned on to it. Back in 1973, I was listening to all kinds of different styled rock music: Mike Oldfield - Tubular Bells, Nektar - Remember The Future, and Kraftwerk - Autobahn. This would have fit right in. But because I wasn't exposed to Brainticket's Cottonwood, it didn't happen. I can say typing this that I'm sincerely glad to not have totally missed out. It's a genuinely cool sounding album that deserves to be heard by a worldwide audience. Better now than never, right?

What we have here is early seventies free-style / experimental / psychedelic rock music. Their own record company stereotyping it drug music was a lethal move as far as popularity and sales. Before the Internet, rumors would travel the globe. It was said the band, when performing in concert, would hand out free drugs to the audience. Of course it never happened. Back then stories of giving out free LSD would certainly not have kept me away. I would have been there in line like it was holy communion time. By and large, acid frightened children, and regular God fearing individuals. Ignorant folks back in the day believed what they heard, tried shielding others from even hearing Cottonwood. How ridiculous. Even more so because of something NO ONE could prove. The musicians involved denied any and all allegations the music had anything to do with drugs of any kind. Unfortunately most of planet Earth didn't listen. For Brainticket's benefit, the album did do well in Germany. Personally, I believe just giving it one listen will dispel any concerns. Frankly, I dug what I heard almost immediately. The music speaks for itself.

On organ and flute is Mr. Joel Vandroogenbroeck. This is the main cat. The only real central fixture, Vandroogenbroeck's the main force of Brainticket. Displays a musical prowess that is at times hypnotic. And that's just on Cottonwood's first song "Black Sand". A catchy as can be instrumental. Keyboard driven accompanied by a unique sounding electric guitar played by Ron Bryer (rest in peace). Worth the price of the CD all by itself.
"Places Of Light", the second offering, has the best flute playing I heard since I last played a Jethro Tull album. Vocals come in the form of poetry where voice is changed by different effects. More catchy keyboard work. Music that makes you think of lava lights and 1960's smoke filled coffee houses.
The rest of the the album / CD is a creative piece called "Brainticket, Parts 1 & 2". This is where folks start throwing around the avant-garde label. I can hear why, the sound effects, weird sounds, repetitive music, voices, a monkey...yes I said a monkey. Wax back in the early seventies, so we had what was called side A & side B of an album. The female voice in and out seeming to have frantic and then almost orgasmic moments, one second to the next. Funky noises fill the ears and then something close to what I would imagine, some sort of orgasmic release: a screaming monkey and then a loud sample of Beethoven's 5th. Flipping the record over and putting the needle on the beginning grooves would pick up where part one left off, continuing further into the odyssey till its climatic ending. And what a ride it was. Audio intercourse that leaves you satisfied at the end, and with a strange desire to smoke something. .
I played Brainticket - Cottonwood loud, on an real stereo multiple times. When having a friend over we played Purple Pyramid's wonderful re-issue of this very cool album three times. Just kept pressing the repeat button. Admitting to that, using the one to five star rating system, I give Brainticket - Cottonwood 5 stars. Of course I do.