Overture *After The Storm* 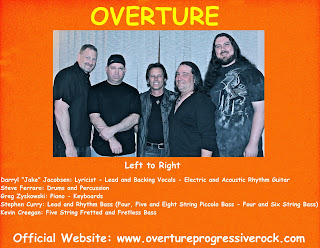 Classic Rock Radio Dot EU - Update *After The Storm*
While writing for this radio station, I shared a little over seven months ago on our Facebook page the horror I felt as I watched a category two hurricane name Sandy hit the east coast of America. Affecting twenty-four States, the hurricane would surpass the damages Hurricane Ike caused here in Houston in 2008. Rated at the time as the number two most costliest hurricane to hit our Country in its over two hundred year history. New Orleans' Katrina (2005) was at the number one spot. A storm that at one moment was heading right towards us (Galveston / Houston area), and then it veered off. Winds topping at 175 miles per hour. Truly frightening, it's Mother Nature at her worst.
What I would call home for twenty years in the beginning stages of my lifetime was right nearby, or directly on the Jersey Shore. I lived in towns with names like South Amboy, Manasquan, and Long Branch. With both my folks being buried in New Jersey, its soil within it's boundaries is and always will be special to me.

After mentally accepting the death and damage caused by hurricanes, folks tend to move on. The Jersey Shore is no different. People either are forced to move because the damages are so extensive, or they are staying and trying to re-build. After the first few initial days of shock, people assessed and went on from there. As days turned to weeks that turned to months, every part of life one could imagine had to be picked up and continued again. Including the process of creating new music.
Out of the rubble rises a new band named; Overture.Originally three friends who jammed together for years and then along with long time band associate / sometimes manager Janine Newman, finding two like minded additional musicians to form the group. While dealing with the aftermath of Hurricane Sandy in their individual personal lives, the new group found the time needed to practice and lay down the beginning tracks for what's hoped to be a new successful musical career for all of them. Not the easiest thing to do. The music business is difficult at best. Success being sometimes just paying the bills and drawing a salary. Maintaining the ability to be able to carry on is something earned, not given. The musical group Overture are now as I speak, independent artists. That's starting on the bottom of the rung folks. Getting ones sea legs an easier said than done situation. All five members dedicated to the cause.

The Jersey Shore and it's grand re-opening that happened on Memorial Weekend, capped off with a visit from President of the United States, was more symbolic then anything. Only small parts affected by Superstorm Sandy have been accurately dealt with, so despite any celebrations / back slapping by otherwise political opponents, their is much more work that needs to be done. Coming back from total devastation isn't easy. Along the way, positive moments are needed to motivate and thank those for their dedication.

What I admire and personally identify with the most is an ingredient I call, the survivor gene. Whatever the circumstances, no matter what, it's the the burning compulsion to go forward. Photos of the aftermath of Hurricane Sandy might suggest that it's easier to bulldoze, and then decide if one rebuilds or leaves. To relocate, a heartbreaking decision based on realities that could never be overcome. Those who stayed and are in the process of trying to make life again as it was before Hurricane Sandy hit, all survivors who work hard, and deserve to be able every once in a while, to relax and party like Summers past, there up and down the Jersey coast. May I suggest something that can help in the lines of entertainment?
Ladies & Gentleman may I introduce Overture.


Overture is a New Jersey based rock / mainstream prog band (Jersey Shore) with an original sound. You'll find progressive, hard rock, pop and classical elements to the music. The combination of melodies, power, and musicality is like no other, with classic and contemporary rock influences.
Overture Band Members:

Greg Zyskowski - Keyboards (aka Greg Z new age recording artist)
Get this -- RELEASED their first song last week *Ten Steps From Yesterday* on iTunes. When chatting with Stephen Curry (hey ProgHeads..Steve's a Piccolo bass player), he mentioned that the song, 'Ten Steps From Yesterday" is a mellower way of introducing the group. Hearing the new song myself I can say it's a smooth listen with rock ballad / mainstream prog influences. Solid performances from all members. That in mind, the prog fan in me always pays close attention to anything piano / keyboards. I conclude at least on this song that Greg's keyboard playing is reminiscent of one of prog rocks greatest piano / keyboard players; Mr Geoff Downes (Asia). "Ten Steps From Yesterday" is in my opinion a good song choice to introduce Overture to the world. Steve promises more rockier and prog sounding tunes on the horizon. Guess he didn't want me thinking they were trying to be the new Air Supply.
I also got a lesson from Steve about Piccolo Basses. When I was listening to "Ten Steps From Yesterday" I swear I heard guitar work at a little past the two minute mark. Not true said Greg and then when I had Steve on the phone, he further explained. Truth be known, Greg did elaborate and for whatever reason I just didn't fully grasp what he was saying. One of those instant message chats. Regardless, the ProgHead in me really digs songs that have more to them than general guitar and rhythm section. The subject intrigued me. On their band bio, it reads this;

"In Overture's infant stage, Stephen Curry had asked Steven Ferraro; how would you feel about having a second bassist instead of a lead guitarist? In which Ferraro replied with a question asking who will do the solos. Curry replied; I will, on the bass and Piccolo bass. The two agreed and have not looked back since."

Closing Thought: For some, disasters are too much to overcome, be it mentally or financially. Every person who carries on afterwards is a survivor. It's nice when feel-good stories appear in the aftermath. Shows positive growth and determination. The Arts / Entertainment are very important tools that help people cope with their everyday struggles. Listening to music, for many as I previously stated is a way to relax and have fun. We here at CRR Dot EU continue to wish all those affected by Hurricane Sandy the best of luck in trying to get their lives back to whatever they consider to be satisfactory. Saying that we welcome the opportunity to report when something cool happens, especially if it involves music. That's our thing. So within the mass destruction is the birth of rock / mainstream prog band Overture. Join us in wishing them a successful and prosperous future. Both the Jersey Shore and Overture are two items I promise to keep an eye on. Updates down the road.