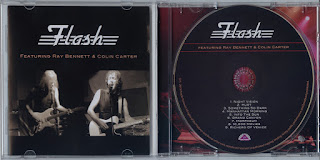 A new Flash album released in the year 2013? Who would have imagined? I know the band well. The lasting impression being are described on their third album cover; "Flash...FEATURING England's Peter Banks." That was the name of the group. The name of their third album; Out Of Our Hands. Released in the year 1973. Discussing this in his autobiography, "Beyond And Before...The Formative Years Of Yes (written by Peter Banks and Billy James) he states that the band and himself HATED the "FEATURING" line, but at the time it was done so for legal reasons. It also took advantage of Banks' fame from previous projects including his first solo record Two Sides Of Peter Banks. The group was said to just prefer the name Flash. Who can blame them, right? Made it come across like the main focus was more on Peter, which made it unfair to the rest of the band. Put the main spotlight on Peter. Not that he welcomed it. Created more problems.

For those unaware, sadly Banks passed away this past March at age sixty-five. Afterwards it was made public that Peter had taken ill the last few years of his life. Toward the end, the guitarist did some guest work on other people's projects but nothing large scale. Certainly nothing like a Flash reunion FEATURING other members as well. An invitation that I was told by a close friend of his that Banks declined. In the meanwhile, original members Ray Bennett and Colin Carter got back to working together a few years ago, performing gigs and coming up with new material. The fruits of their labor being this new release. The title, "Flash...FEATURING Ray Bennett & Colin Carter"...a tip of the hat to days gone by perhaps? A symbolic victory in a way assuming the band that brought the lawsuit over the bands name and prompted the line FEATURING, long gone. No matter whose name(s) appear after the name Flash, when playing Flash music, be it old or new, collectively they are and always will be just Flash. Again a contender in the world of current prog rock, minus Mike Hough, the original drummer, and with the addition of a few other players, putting out new material.

Peter's passing was mentioned on just about every news outlet that I'm aware of. I dedicated a column on him in my almost daily offerings for Classic Rock Radio Dot EU. Was only about a week ago I opened a package and was absolutely floored when I pulled a new Flash CD out. And when I cracked it open and played it...wow. Hard not to be impressed. Matter of fact, it sounds like the band Flash has another hit on their hands. And better yet, instead of being another seventies rock band that just faded away, with the release of new material, the legacy can still grow. And this I repeat is after their last studio release which was in the year 1973. The already mentioned 'Out Of Our Hands' album.

Regarding Banks, his contribution to the group will always be missed, and truly never be forgotten. Hopefully those younger folks digging on this new offering will dig into the Flash catalog. It's music that would be a shame if missed. An honorable mention is "Small Beginnings", from the group's debut album, and the bands biggest hit. Classic rock stations from all over the world, airwaves and Internet alike, should have at least that Flash song in their regular rotation. Other great songs as well.

Right from the beginning, the very first song, "Night Vision" on Flash featuring Ray Bennett & Colin Carter jumps right out at you. I get the same vibe when hearing it as I do when playing "Small Beginnings". Outstanding keyboard work very reminiscent to the band's first keyboard player, Tony Kaye. His style of playing, a vital ingredient in the past Flash sound. Night Visions a great upbeat song that deserved repeated plays. In the old days a number destined for FM radio play. An Uncle G suggestion, get to know the song "Night Vision" before venturing on. It's that good and deserves repeated plays. Play it loud! Get your groove on!! It's cool! All tracks are solid. Here's something about this new Flash endeavor. Like fine wine, best to enjoy in sips so to find a greater appreciation.

For the last week I've been jamming pretty solid on this CD. For those not yet up on yours truly, I'm an old album guy. I carried that with me in regards to my using newer technology. In a nutshell, I tend to play CD's from start to finish and think of the CD as a whole, instead of just finding individual songs I might like. From the beginning track in which I just mentioned, to the last track called "Richerd Of Venice". Again, like the song that leads off the CD, "Night Vision", "Richerd Of Venice" is another track that includes exemplary keyboard work. I'm a prog rock fan. This makes my day. One of two instrumentals on the CD. Note..."Richerd Of Venice" was a wise choice for the disc outro.

If someone wanted to know what a modern prog rock CD should sound like, I would give Flash's new release as an example. There are good things to say about every song. For example, track two is a cover of a Nine Inch Nails song made famous when re-recorded by a then well aged and dying Johnny Cash; Hurt. In what is traditional Flash style, they make the song their own. Impressive vocals with a strong supporting cast. The song maintains its gut feeling and is presented in classic prog style. Infectious as hell, it begs for repeated listens.

Track three is a well paced rocker containing some real juicy guitar work by Ray Bennett. Throughout the CD both his and original member Carter's performances really shine through.

Track four is a re-make of their own song from Out Of Our Hands called "Manhattan Morning: Christmas '72". They slowed it down a tad and dropped the holiday part of the title. Both songs processing an excellent bass line working through it. Both versions containing stand out moments.

Track five is a cool prog rocker called "Into The Sun". It rocks...it slows down...it rocks again. A nice blend of vocals and music. Got their shit nicely together here. Meant to be played loud.
Following up is a tune called "Grand Canyon". A slower tempo tune and in being so, a showcase for Carter's vocals. The tune blends in well with the overall tone of the CD.

Mr. Carter penned the second to last song called "10,000 movies". Overall, a fun song with a good beat when rolling along. Then the CD closes with "Richerd Of Venice" in which I already spoke highly of.

Rating: Using the star rating system of one to five stars with the highest number representing excellence, I give Flash FEATURING Ray Bennett & Colin Carter -- 5 stars. A no-brainer. Concerning a follow up -- guys (should they really be reading this) -- no waiting another FORTY years OK.