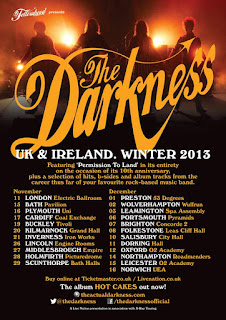 Girding their loins for a full frontal assault on the UK in November and December The Darkness have announced dates for a pre Christmas jaunt. The band who came to prominence in 2003 with their album Permission To Land and the hit single I Believe In A Thing Called Love. The band scored a major success with the album which attained "Quadruple Platinum" selling in excess of 1.3 million copies

During the tour The Darkness will be performing the album Permission To Land in its entirety in celebration of the albums tenth anniversary. The band will also perform selected hits B Sides and album tracks .
The band's current album Hot Cakes is out now

Tickets are available from