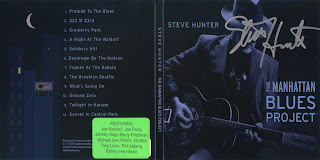 
Spotlight: Steve Hunter - The Manhattan Blues Project (2013 Deacon Records)
The first KickStarter program I pledged money. A new Steve Hunter solo project. It's a story I'll tell the rest of my life. And with wonderful results for it funded, meaning the artist succeeded in reaching the goal set, and now the CD is a reality. A guitarist rock fans have been listening to since the golden 1970's. A man who helped make popular such names in music as Lou Reed, Peter Gabriel, and Alice Cooper. A professional musician in every meaning of the word. Displays superior guitar skills with each and every song he participates on. One of Steve's latest successes being the lead guitarist on Alice Cooper's Nightmare 2 album. Then being ever so respectful, standing in for the deceased Glen Buxton when the Cooper's were inducted in the Rock n' Roll Hall of Fame.

Mr. Hunter, a sometimes independent artist, met his financial goal to put out this CD through a website I just previously mentioned, KickStarter Dot Com. To all others thinking of getting a project funded, a lesson in how it's done. Came to my house autographed with a signature that can actually be read. Packaging design done very nicely. Good photos of Steve and I like the darker colors used in the cover wrap. Via Kickstarter and Steve's official Facebook page, his wife Karen communicating with folks keeping everyone abreast as to everyday occurrences. The whole experience made it a pleasure to participate. The Hunters both come across online as very pleasant, and ever so professional. I personally could not be any more happier to be a pledge participant. My first time backing an idea proposed on KickStarter, and then it met and or exceeded it's goal. I have witnessed proposed projects crash and burn. Will continue to keep open minded to participating again.

Steve Hunter has already participated on unique concept albums held in high esteem by fans and critics alike. And like all other past projects, The Manhattan Blues Project is consistent on the entertainment meter. Deeper than just the hit songs he participated on. The listener is getting a more personal understanding of the man behind the guitar.

The topic of this CD is of course, Manhattan. It is the smallest of the five boroughs that make up New York City. Madison Square Garden is located there. Having hung out in Manhattan (considered a county of New York State) as a teenager I can tell you first hand that it's an encyclopedia when it comes to music. Different bars / clubs all having different sounds. Big acts like The Rolling Stones used Manhattan / New York City as a backdrop for many of their songs. My introduction to rap was heard walking the streets of Manhattan. Young black guys on the street corners using rhythms to sell their drugs. I'd shake my head no and smile. Already had all the drugs I needed.

Each song on The Manhattan Blues Project is as unique as the location it's named after. The CD starts off with typical outside street sounds. A nice instrumental mood piece that leads in wonderfully to one of the most bad ass songs I"ve heard in ages called "222 w.23rd". Do justice here and listen to this with a good pair of headphones. The song got a prominent lovemaking vibe. Music you imagine hearing in an erectile dysfunction TV commercial, when the pill takes effect and it's time to get busy. Maybe I'm the only one hearing this? And I'm not saying in anyway, anything bad. The song inspires shagging. Has a definite sexiness to it. Includes interesting background noises, a vocal rap by Tommy Henriksen, some slide by Michael Lee Firkins, and Hunter's wife Karen acing the background vocals. For Steve, Uncle G predicts a new greatest hit. Guaranteed repeat plays. It's that good. And then draw a tub for you and a special friend. Let the music take you both away (wink wink).

At times throughout The Manhattan Blues Project Mr Hunter has some rather exceptional friends join in. One of my favorite bass players, Mr Tony Levin appears on a couple of songs. One is a re-imagining of a Peter Gabriel hit song called "Solsbury Hill". Ninety-eight percent is an instrumental with uncredited male background voices heard in somewhat harmony. Overall the guys did the classic rock song justice. An enjoyable track.

"The Brooklyn Shuffle" totally shines. Traditional blues sounding song with some outstanding guitar work by Steve and two other gentlemen: Johnny Depp and Joe Perry. Both offering meaty solos. Karen again outdoing herself on background vocals. Be fun to see this played in concert.
"Ground Zero" is a haunting, yet beautiful piece. Evokes emotion when listening to it. So many terrific days in Manhattan's history and then you have that very dark one. Not a totally depressing tune, Hunter captures the right vibe. Each note and chord played, backed with feeling. A positive sign of a good blues guitarist.
"Twilight In Harlem" has this funky groove to it. Joining Steve on guitar duty are Joe Satriani and Marty Friedman. The song has a real band sound. Helping to make this so on keyboards is Phil Aaberg, with drummer Todd Chuba.

"Sunset In Central Park" is the last song on the CD. On bass again is Tony Levin and on cellos is 2Cellos. All the ingredients needed to close the CD on a fine note. Nice outro !!
Rating: A friend asked if I could be non-bias. Knew I been a longtime fan. An old Alice Cooper associate that Steve also knows would say assessing yours truly that I'm loyal and honest like a boyscout. To me that flattering. Using the one to five star rating system I give Steve Hunter - The Manhattan Blues Project: 5 very solid stars. Well done Mr. Hunter. Well done indeed.