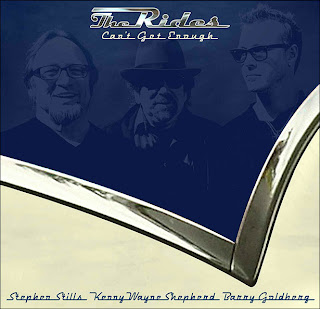 GENERATION-SPANNING TRIO BLISTERS THROUGH CO-WRITTEN ORIGINALS AND COVERS OF CLASSICS BY ARTISTS INCLUDING MUDDY WATERS,
ELMORE JAMES, IGGY AND THE STOOGES, AND NEIL YOUNG

Featuring 4 co-written originals, a handful of covers, and a vintage, previously unrecorded Stills gem "Can’t Get Enough" was inspired by - and is an homage to - the now classic 1968 album Super Session, which featured Stills on guitar on one side, and the late Mike Bloomfield on the other (Bloomfield had founded Electric Flag with Goldberg, who also played on Super Session, as did Blood, Sweat & Tears keyboardist Al Kooper).

The Rides bring a historic and distinctively American musical blues rock hybrid into the 21st century. Described by Stills as "the blues band of my dreams", The Rides will embark on a world tour beginning in September, with UK November dates to be confirmed in the coming weeks.

The project began with Stills and Goldberg writing together at their mutual manager Elliot Roberts’ recommendation. "It was like finding a long lost soul brother" says Goldberg (who hadn’t met Stills before, their shared 1968 credit notwithstanding). "We connected on so many things, started jamming, and soon had begun writing our first song."

That exhilarating creative sorcery blasts through ten tracks, four of them Stills, Shepherd, Goldberg co-writes including the album-opening barnburner "Roadhouse" - about the life of an itinerant bluesman - the melodic, CSN-esque "Don’t Want Lies," and the title track, a groove soaked, guitar-heavy anthem with a soul-baring lead vocal by Stills. Other highlights include a Crazy Horse-calibre interpretation of "Rockin’ in the Free World". "Everyone gets off on this one," says Goldberg, "it’s just a ton of electricity on this Neil Young classic."

The four additional covers are the tracks on which Shepherd sings lead, including "Talk To Me Baby" and "Honey Bee" by blues giants Elmore James and Muddy Waters, respectively, and Iggy and The Stooges’ "Search and Destroy," which The Rides truly make their own. The album closes with the raucous "Word Game," a song Stills wrote during his late ’60s era with Buffalo Springfield, but never recorded. "It’s an old acoustic song that I had fun adapting to an electric band," he says.

The album was recorded live in the studio over the course of about a week at EastWest in Los Angeles, helmed by long-time Shepherd producer Jerry Harrison (Talking Heads, Modern Lovers). Mostly first or second takes made the album’s final cut. In addition to Chris Layton, Shepherd’s drummer, and also a veteran of Stevie Ray Vaughn’s Double Trouble, the album features bassist Kevin McCormick (CSN, Jackson Browne)

."In the spirit of that simple, raw authentic 40s and 50s blues music the three of us love, we got in there and boom! A few takes and we were done," says Stills. "The songs have muscle; they don’t sound dated or contrived. They’re very natural and organic. I can’t wait to tour with these guys and start recording again."