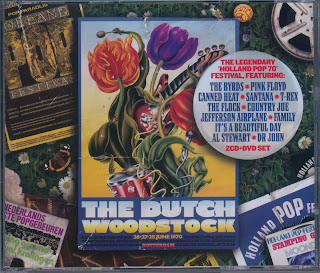 As the start of a new decade took place, a three day rock concert was attended by over a hundred thousand people,labeled The Dutch Woodstock. The year was 1970. An outdoor concert that was held in the Kralingen neighborhood of Rotterdam, Holland on June 26, 27 & 28th. Despite the weather not cooperating, in the form of rain, the concert itself appeared to have gone off without a hitch. Various bands performed on the main stage or nearby. The focus here is on the main event.

Gonzo Multimedia brings us a 2CD / DVD set that captures the peace-loving three day-long festival. Headlining was Pink Floyd. All three days filled with sounds of all kinds of musicians / bands. Some known around the world or would soon be were Santana, Canned Heat, T. Rex, Al Stewart, The Bryds, and Jefferson Airplane just to name a few.
Busting the 3 disc set open, I decided to view the movie first before playing the audio discs. Ended up viewing the film repeatedly over a course of 3 days. About four views. I turned it on and just let it play in the background. This is after watching it through the first play. A good sample presented for listening and viewing pleasures.
Uncle G's Highlights:

Grace Slick belts out the song White Rabbit with the rest of Jefferson Airplane, while pregnant I believe. Both her and Paul Kantner are also interviewed.

Pink Floyd's segment is not to be missed. Both songs on CD / DVD: Set The Controls For The Heart Of The Sun / A Saucerful Of Secrets (Waters playing the gong)

Santana's on fire.
Canned Heat: Passing along a joint(s) the band does an awesome performance.
Dr. John & The Day Trippers: They keep a good beat. Fun song:Mardi Gra's Day

If pissed off seeing the word 'joint', then you'll freak with this next one: nudity. A fair amount as well. Add to that, fairly consistent drug use by performers and crowd alike. Now when I say drugs, it's mostly marijuana use from what I can see. Being kind of knowledgeable about these things I can say some in the crowd exhibit behavior usually assorted with use of LSD, or even anti-depressants. Some of the crowd walking by the filmmaker's cameras are almost zombie-like at times. Which is what makes me guess downers. Plus they were popular back in the seventies.

No need for having your hands clasped together praying for the participant's souls, those that are, of course, still alive. Most on the average I'm guessing are still breathing, ages sixty and up. The babies in the film would have to be in their forties now. Regarding sex, some sexual activity occurred, but nothing that would give it an X rating. Most if not all total nudity is female. All over sixteen years of age or older I imagine. I say this because pubic hair is shown creeping up towards their stomach and also seemingly down the thighs of several of these natural young women. That was the style then. Big bushes were all the rage.

Hard to believe that the innocence of the decade, not that long ago, would equate music and getting high while naked with strangers, which would in turn, promoted peace. Or that it would have a effect on peoples beliefs. I believe it can at least make some people aware. The DVD in this set is a historical visual document on the occasion. Saying that isn't correct. Not really. For the film gives only one point of view, that of the filmmakers. A very cool documentary, where for the viewer, it's almost just like being there. So much so I could swear for at least a few seconds while it was on that I could actually smell pot. Far out huh?
Now that I said all that, there is NOTHING offensive in the film. As a matter of fact, it's a cool thing to watch the over hundred thousand interact with the music and each other while the concert is going on. One scene shows the people in the wee hours of the night, all mostly sleeping. In the daytime, the hotter it seems to get the less the need for clothing. But It's all natural. Even with nudity included, there's nothing perverted. Not a thing that would make you hide the teenagers. Rather they see people in a large group like this getting along, or something more modern day where folks always get hurt? I rather a kid of mine see a pair of bare tits exposed for the same reason a man has his nipples exposed, then watch someone get their head smashed in. Makes me wonder if something like the 1970's Dutch Woodstock could happen nowadays. A three day event like that. No violence. Mass cooperation. It's a beautiful thing to see. The documentary / concert film does get a little artsy fartsy but that's part of the charm.

The film and audio wasn't recorded in 2013. It was taped and preserved since 1970. A lot of advancements made in recording sound over the decades since. Nowadays you can buy a Blu-ray of a concert filmed by forty cameras and all the state of the art recording equipment, and when you play it at home it's like you're front row at the concert. It's cool, especially for being at home watching TV. I can't expect that from a concert performed and taped over forty years ago. So this isn't the best state of the art sounding audio. Soundboard but could be a better mix. Sometimes one instrument is louder then another. Keeping that in mind and understanding it to be what it is, then I imagine one can get past that and receive much entertainment in the process. I sure have. It's the movie included that sold me. Looks like so much fun to be there. Since that's impossible then it's cool revisiting, which is what this 2CD and one DVD set allows the consumer to do.

Rating: Using the one to five star rating system, I rate the DVD 4 stars and the 2 CD audio discs 3 stars. Gonzo did a great job on the overall product. Sometimes one has to do the best with what they have to work with. To not release this would be a crime. Why, just because it wasn't perfect in picture and sound quality that would equate 2013 standards? Frankly, I find it cool that the event is out there for new generations to see and experience. Am delighted to add this to my CD collection.