FAC51 A Bit Of Manchester 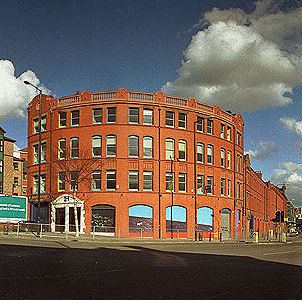 I have had in my hands a piece of Manchester's musical history which I believe will endure for many more years.In the 1980's and 90's there was a club and venue at the heart of music, that club was the Hacienda on Whitworth Street West.


The face of the Hacienda was a legend in Manchester TV personality and boss of Factory records 'Tony' Wilson who managed to keep the enterprise going despite mounting problems until it finally closed the doors on music June 15th 1997. Despite being one of Manchester's iconic buildings which in any other forward thinking city would have become a tourist venue, in 2002 the place was flattened and in its place now stands an apartment building bearing the Hacienda name.

Which brings us almost to the present but before the Hacienda was bulldozed and its contents consigned to the skip of time, key parts of the interior were sold to interested parties. Fortunately the dance floor was made of Canadian Maple a very durable wood and coincidentally a very popular choice among luthiers. That fact did not escape the attentions of Chris Hewitt promoter, record label boss, studio owner and festival supremo.His epiphany was to incorporate parts of the Hacienda into a bass guitar and he very kindly allowed me to lay hands on it. 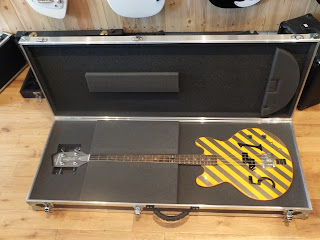 It is a very distinctive instrument cut from the pattern of Peter Hook Joy Division and New Order's bass dispensing with f holes in favour of the number 51. Now do not be fooled into thinking there are 50 odd of these about in the wild the first made is in the hands of Peter and which is numbered 51 the one we feature is numbered 55 so thus far just five have been made they are expensive to do and built to order - you buy one and Chris makes another until he runs out of that Maple. 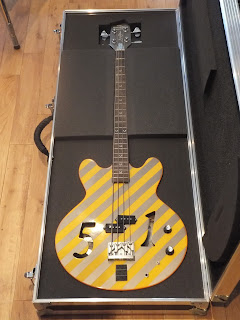 The construction involves taking a plank from the dance floor and stripping it back to good sound wood. You have to bear in mind this was the day when people smoked and girls wore evilly dangerous stilettos despite the high polish on the floor Stacey,Diane and friends will have furnished a layer of dents scratches and fag burns to the wood. That thin layer is laminated to the neck of the axe on which I have to point out another feature the head stock is cut and shaved so it mirrors the shape of the Hacienda dance floor. Our Bass has some other unique features at the rear the covers on the electronics and truss rod are cut from the club's stair tread polished beautifully to enhance the look, on the front just below the bridge is an inlay of marble engraved with the legend FAC51. That marble spent its working life on the bar top before ascending to a higher plane. The colour scheme is chosen
to represent the warning signage that decorated the club 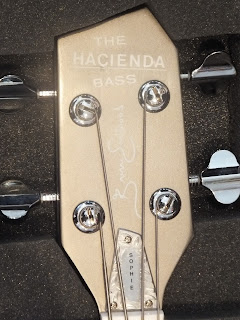 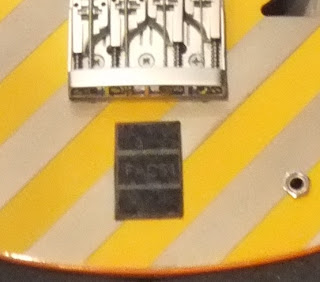 So there we have it did Bez spill his drink on that bar top or maybe crash out on it (quite likely) Tony Wilson no doubt spent time chatting above it maybe ran a cloth over it at closing time and how many chicks/dudes do you know who shook out the night on the Hacienda dance floor before clattering up or down the stairs. No doubt about it the axe is linked with Manchester like no other I should perhaps say to Madchester and that is how we roll in the Rainy City. 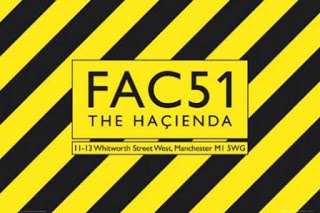