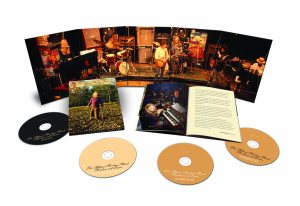 When the Allman Brothers Band’s fifth album, Brothers and Sisters, was released on Capricorn Records in August 1973, the legendary southern blues-rock group had already achieved world-wide fame with their 1971 live album, At Fillmore East. This success was followed by the tragic loss of their founder, leader and musical visionary, guitarist Duane Allman, who died in a motorcycle crash on . Arguably at the peak of their popularity, the band's album followed the release of the two-disc Eat a Peach, released and the last recording to include contributions by Duane.

While regrouping under the leadership of singer/organist Gregg Allman and guitarist/vocalist Dickey Betts, the Allman Brothers Band soldiered on with Brothers and Sisters, which turned out to be their most successful selling recording to date, spending five weeks at number 1, and the first to achieve platinum status. To mark its 40th anniversary, the original classic recording, which includes such Allman standards as Ramblin’ Man, Wasted Words, Jessica and Come and Go Blues, will be re-released in re-mastered form on both CD and vinyl, plus deluxe two-CD and four-CD box sets that include previously unreleased rehearsals, jams and outtakes.

The album’s famous front cover features a photo of Vaylor Trucks, the son of drummer Butch Trucks, while the back sports a shot of Brittany Oakley, the daughter of bassist Berry Oakley. The gatefold pictures the entire Allmans family: band members, roadies, wives, girlfriends, children, dogs, all in a seemingly idyllic Southern setting, capturing the family nature of the project.

The deluxe two-CD edition of Brothers and Sisters includes the original re-mastered recording as well as previously unreleased rehearsals of Wasted Words, Trouble No More, One Way Out, I’m Gonna Move to the Outskirts of Town and Done Somebody Wrong; outtakes of the instrumental Southbound, Double Cross and Early Morning Blues, as well as the brand-new archival find, A Minor Jam. The four-CD set includes two discs devoted to a live performance at Winterland in from , just after the release of Brothers and Sisters and featuring an introduction by Bill Graham. It features previously unavailable live versions of Done Somebody Wrong, Stormy Monday, Midnight Rider, Statesboro Blues, You Don’t Love Me (which includes Amazing Grace), Les Brers in A Minor, Blue Sky, Trouble No More and Whipping Post, along with two Brothers and Sisters tracks in Come and Go Blues and Jessica.

"By the time they released their fifth album Brothers And Sisters in August 1973, the Allman Brothers Band had experienced dizzying highs and soul-crushing lows. The group had spent its first two years developing its formidable collective chemistry into an unprecedented stylistic fusion that established it as the era’s most influential American rock act. But just as the band had achieved a hard-won commercial breakthrough with 1971’s At Fillmore East, it suffered a devastating loss with the death of Duane Allman, its founder, leader and musical visionary, in a motorcycle crash on October 29, 1971.

Following Duane’s traumatic passing, the band regained its bearings and soldiered on, with Duane’s brother, singer/organist Gregg Allman, and guitarist/vocalist Dickey Betts—now the lone axeman in an act famous for its dual-guitar fireworks—assuming more prominent roles in its direction. The musicians marshaled their strengths to make Brothers and Sisters—their first album recorded completely without Duane—a decisive creative rebirth as well as their best-selling release to date.

Brothers And Sisters bested the sales of At Fillmore East and Eat A Peach, spending five weeks at #1 and becoming the first Allman Brothers Band release to gain Platinum sales status."

Check Out The Allman Brothers Band on the Web Here:
http://www.allmanbrothersband.com/