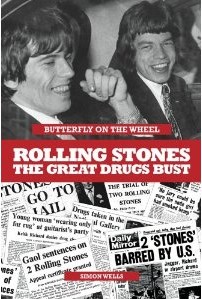 Butterfly On A Wheel: The Great Rolling Stones Bust
Simon Wells
Omnibus
The Sixties is sometimes set in amber as a wonderful time were art music and freedom all came together to make a truly wonderful world for us all to live in. Of course it never was like that and sometimes there was a definite dark undercurrent running through the sixties. In terms of Music the Rolling Stones got off to an early start as “enfant terrible” with headlines such as “Would You Let Your Daughter Marry A Rolling Stone”. By 1967 however the press were much more interested in the Rolling Stones off duty activities suspecting that they were involved in much more dangerous ways of letting off steam than the odd “Scotch and Coke”.
Of course the Stones were no more or less involved in the burgeoning drug scene than any musician had been for the previous thirty years and during the period in question if anything probably reasonably clean but being the bad boys of rock music  set against the wholesome Beatles, became in 1967 a major cross for the band to bear.
Taking the title of his book from the headline in the Times newspaper written by William Rhys Mogg Simon Wells has done an excellent job of research on this book managing as he does to unearth previously unseen information concerning the bust itself and of course the changing attitudes it brought about
The book does however have at its core the full details of what went on that night in February in Sussex at Keith Richard’s mansion. A real tale of sex Drugs and Rock n Roll but also a very good insight to Middle England as it stood in the mid sixties. It is amazing to think that both Mick Jagger and Keith Richard were imprisoned for what now would seem a rather petty case of possession and in the case of Mick Jagger a more than dubious charge of possession of four pep pills that were actually legal in Europe.
For fans of the Rolling Stones there is still much here to read and digest even if they may think that they know all there is to know about the decade’s most notorious and high profile drugs bust but that aside the book is a very good read for those who may not be the biggest Rolling Stones fans in the world; covering as it does rather well the times in which the events happened. In summing up Butterfly On A Wheel is a rather fine social commentary that just happens to involve the Rolling Stones at its centre but an excellent book nevertheless.
You can buy this book directly from Omnibus here:
http://www.omnibuspress.com/Product.aspx?ProductId=1011369
Posted by Jon Kirkman at 14:04