Girlschool Rock and Roll into Cornwall 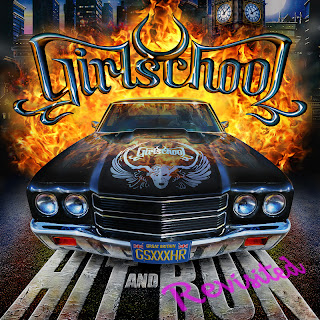 Thirty years ago, long before the term ‘girl band’ had been coined, 5 rock and roll ladies were blazing a trail across the almost entirely male dominated heavy metal scene.

The band was Girlschool. No such crimes to music as lip synching for them. No, just full on raucous leather clad rock and roll, of which the song Hit and Run is probably the best remembered, taken from the 1981 album of the same name.

To celebrate its 30th anniversary the release of ‘Hit and Run Revisited’ was launched and it has to be said, the songs sound as timeless and classic today as they did when originally released.
The current lineup is original members Kim McAuliffe (rhythm guitar, lead and backing vocals) Enid Williams (bassist and backing vocals) Denise Dufort, (drums and backing vocals) and replacement to the late Kelly Johnson who lost her battle with cancer in 2007, Jackie Chambers

Good news for West Country rock fans is that on December 3rd Girlschool are doing a one off gig at Livewire situated underneath the Tamar Bridge joining Plymouth to Cornwall on the Cornwall side. And the tickets are priced very reasonably at just £10.

The venue is actually a youth centre charity run by Andy Rance and his wife Julie, both ardent rock fans and the gig will help them raise valuable funds for their ongoing work with the region’s youth.

Andy is very proud to have pulled off such a coup at getting Girlschool into his venue.
A close friend of Motorhead’s Lemmy, through whose association he also got to know Girlschool, he persuaded the band to do a one off gig at the venue.

Supported by two local bands, Keynuyck from Cornwall and Facemelter from Plymouth, the gig promises to be one of the highlights of Livewire’s record of attracting touring bands, two of which have included The Dammed and The Hoosiers.

In addition to the live music, rock fans will be able to help support the charity STAND UP AND SHOUT which was set up to honour the late, legendary Ronnie James Dio and raise money to help find a cure for cancer during the evening.

Girlschool will sign a guitar donated by Hartnols Guitar Shop Plymouth and this will be shipped to the USA and auctioned along with a whole lot of other guitars to raise money for the foundation, Motorhead have also donated some items to be auctioned off during the night.

Tickets are available on www.seetickets.com or on the door on the night subject to availability. Livewire’s website can be found at www.livewireyouth.com