Heart: Career Spanning Boxed Set Due For Release In June 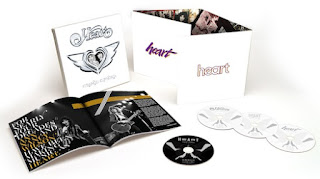 "In all the years we have been making music we have seen trends come and go," said Ann Wilson. "We have always felt that to try and chase the latest 'it' sound is pointless, and we have tried to remain true to ourselves as songwriters and musicians. Sometimes we have had amazing success and heard ourselves on the radio...other times not so much, but the music is always playing in our house. In this box we have included many things that until now have never seen the light of day. Also here are our favorite deep tracks and live moments that really speak to who we are on the stage and the connection between us and the people who show up to rock. Enjoy this collection. It has many facets just like we do, but the spirit running through it is all Heart."

Ann Wilson and her younger sister, Nancy Wilson, first showed the world that women can rock when their band Heart stormed the charts in the 1970s with hits like "Crazy on You," "Magic Man," "Barracuda," 'Straight On," "Even It Up," "Kick It Out," and many more.  Not only did the Wilson sisters lead the band, they wrote the songs and played the instruments, making them the first women in rock to do so.  Heart continued topping the charts through the '80s and into the '90s with huge hits like "These Dreams," "Alone," "Never," and a string of other hits that showcased the sisters' enormous talents as both musicians and singers.

Along the way, Heart sold more than 35 million records, had 21 top 40 hits, sold out arenas worldwide, and profoundly influenced the sound and direction of American rock music while inspiring women (and guys too!) around the world to rock out in bands of their own.

Heart were 2008 recipients of VH1 Rock Honors, received a Lifetime Achievement Award from the Northwest Grammy Foundation, and received ASCAP's award for Excellence in Songwriting in 2009.

In August 2010, Red Velvet Car, the first new studio album in six years from Heart, entered the Billboard 200 best-selling album charts at #10, becoming the seventh Top 10 album of the group's career. The group's first album for Legacy Recordings, Red Velvet Car marked the return of the group to the Sony Music Entertainment family, reaching #1 in sales on Amazon.com in September.

What's made Heart endure across four decades and 13 studio albums, from Dreamboat Annie (1976) through Red Velvet Car (2010), is simply the quality of the music and the Wilsons' ability to connect to the emotions and experiences of their audience.

Strange Euphoria represents the first time Ann and Nancy have personally curated a collection of their work and is the only time they've opened up their vaults for demos and rarities never heard by the public. The set includes song-by-song annotations, anecdotes, and commentary by the Wilson sisters.