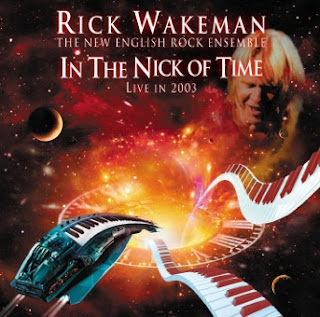 .
After leaving YES following a world tour in 2004, Rick concentrated on his solo career and collaborated with Jon Anderson on a number of projects including tours of the UK and US and a studio and live album.
The latest release from Rick Wakeman is an archive live album titled 'In The Nick Of Time', which was recorded in 2003. The album was recorded during the tour to promote the then current studio album 'Out There'. Rick performed with the “New English Rock Ensemble” which featured Rick alongside old hands Ashley Holt, Tony Fernandez and new boys Ant Glynne and Lee Pomeroy.
Tracks featured include: "Out There", "Catherine Parr", "No Earthly Connection", "White Rock" and "Wurm". The album has been much anticipated by the large and dedicated Rick Wakeman audience and this release will be the first time this album has been commercially released.