Dissidia - how they rock in Italy

First of our new band articles is a Gothic Prog band from Rome in beautiful Italy.
Italy has always been known for music (and of course food and sports cars). However internationally it has generally been classical music especially opera at the forefront with occasional snippets of Eurovision (god help us).There is a thriving pop music scene but rock music well it seems to be rather in the shadows apart from once in a while a band like PFM or Goblin gets some coverage, so when I was contacted by the singer of an Italian prog outfit I was more than a little interested to hear what they have to offer . 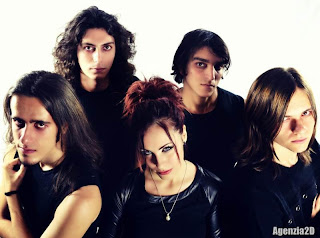 Dissidia lead singer Herma admits that in Rome it is really difficult to make much impact against the pop mainstream they suffer from a lack of suitable small and club type rock venues the local culture is mainly manufactured pop music, which as we know like dandruff is everywhere and filling the clubs. So building a regular dedicated audience was going to be a struggle, at the recorded live gigs I've seen they are getting the kind of response that indicates they have a bright future Gothically inspired. Dissidia started as a tribute band for Arkansas rockers Evanescence ( you may be familiar with their big hit “Bring me to Life” ) in 2009 and by 2011 had decided to move away from tribute and do their own thing going into a cross genre Prog which Herma teasingly describes as 'Dark, Gloomy and Gothic' not falling into the usual slots. I'd go further to my ears it is far from gloomy and I would add the stamp of Orchestral Prog on the package too. Either way you look it works very well and we will have to wait for the album release to see which way the band will move. 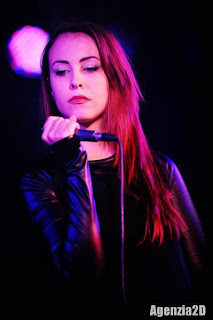 With Herma's beautiful vocals which resemble vintage Kate Bush the five piece band comprises Giordano who doubles on piano and bass, Enrico on Guitar, Francesco doubles on guitar and cello and percussion is taken care of by Valerio. The great thing with the instrumental options it gives Dissidia the chance to completely change the sound and mood between rock and orchestral using just the band members. I mentioned they have an album being recorded which is keeping them off the road and in the studio at present. I'm very impressed by the mixing of the tracks I've heard no doubt due to the band doing much of their own production and not resorting to multiple overdubs to boost the sound. The result of this is closer to a live recording altogether fresher than heavily enhanced studio output that some very well known bands use. Producer on the new album is the highly experienced Fabio Pignatelli who as well as writing for and playing Bass in 'Goblin' has screen credits on a number of film and TV scores.(sshh-he did Shaun of the Dead) A few songs are out on you tube showing the immense range of Dissidia from the rock of 'Shoot and Pray' to the ethereal classic prog 'The Ash Of You ' really worth a listen if you enjoy the crossover between Prog and Classic Rock as much as I do Great young band, great future, look out for the release which we will post up as soon as we hear along with further news.
Posted by Derek Watts at 00:42