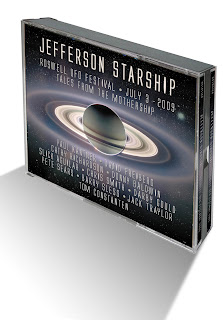 The group was also bestowed the honor of being the parade’s ‘Grand Martians’ that year and rode atop a special float especially built for them. The entire concert was filmed and recorded, and in addition to such iconic hits as “White Rabbit”, “Somebody To Love”, “Volunteers”, “Wooden Ships” recorded by its forebear Jefferson Airplane (the last two penned by Kantner), a special programme of science fiction themed compositions and select recordings were performed, some for the first time ever!

Now, much to the excitement of Jefferson Starship fans across the globe UK’s Gonzo MultiMedia is releasing the the entire concert in an extravagant 4-CD box set.
Posted by Jon Kirkman at 16:14