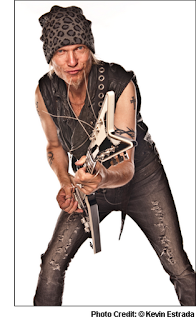 Due to the critical acclaim Michael Schenker received on his 2012 UK tour, the legendary guitarist will return with his classic rock band "Temple of Rock" on a 12-date UK tour in April 2013. The tour kicks-off on Tues 9th April at ARC, Stockton on Tees.

Songs to be performed by the “Temple of Rock” include UFO’s Rock Bottom and Doctor Doctor, MSG’s Armed and Ready and Into The Arena, and the Scorpions classics Another Piece of Meat and Rock You like a Hurricane. In addition, Schenker will perform brand new songs from the recently released Temple of Rock album including the Planet Rock radio favourite Before the Devil Knows You’re Dead.

In 2010, Michael Schenker received the Marshall '11' Award at the Classic Rock Magazine Roll Of Honour Awards. The following year he rocked the High Voltage Festival, and also toured the UK with Black Country Communion.