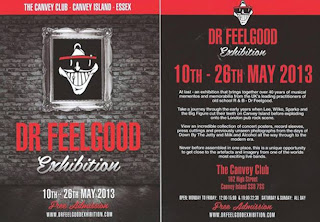 The last few years have seen an incredible focus on DR FEELGOOD, for over four decades one of the greatest of British Rock and Roll institutions. The Julien Temple documentary, Oil City Confidential, seared the Feelgoods story into the synapses of all who saw it, the impact all the more poignant with the subsequent news of founder-member Wilko Johnson’s terminal illness.

The DR FEELGOOD EXHIBITION, which is to run from May 10ththrough to May 26th 2013, at The Canvey Club, 162, High Street, Canvey Island, SS8 7SS, celebrates the band in all its incarnations, with a feast of memorabilia including rare photo shoots, concert posters, album and single sleeve artwork, and items such as a Lee Brilleaux waistcoat donated by his widow, all the way through to their present line-up, still one of the hardest-working bands of the day.

The whole has been lovingly assembled and curated by Chris Fenwick, the bands’ manager for those four decades, and a man with a story to tell himself.
Posted by Jon Kirkman at 11:09