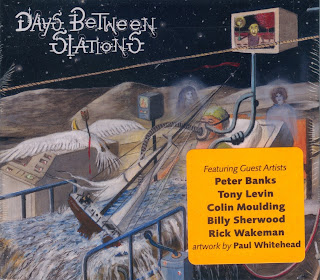 Spotlight: Days Between Stations - In Extremis (2013)

I always try to review music CDs that I think those who regularly read my column on CRR Dot EU (Blog and Facebook) will enjoy. Keep in mind, CRR Dot EU is a classic rock station, but not one whose feet are cemented firmly in the '70's / 80's. Nor are we the one who play the same song everyday at the same time. The complaints on every day old-fashioned radio are becoming old hat, much like most of their so called morning show comedic material. No wonder Internet radio stations like ours are all the rage with not only the over-30 crowd but today's youngsters as well. When comparing, it's a matter of fact we're better. That's what the younger folks are saying on the street anyway. I'm not shy. When the opportunity presents itself I always strike up a dialogue. It's that or be totally out of touch. Long story short, I do have at least a slight idea on the new generations listening habits. I don't yet qualify for Happy Hills. Give me another two decades, at least.

Sure the station I write for at times plays the often repeated too much, classic rock songs. What song is it y'all what to hear? I was sick of hearing Lynyrd Skynyrd's "Freebird" by the time I was seventeen years old. Still, a business such as a classic rock station can't ignore greatest hits. But what we can do, is play them less. And inbetween those iconic songs, newer music from stand out musicians of yester-year that are still out there entertaining and making a living.
Simply said CRR Dot EU's play-list doesn't bore anyone to death. Add to that CRR Dot EU truly believes every word I type. So if I recommend something gets played for our cool listening audience, the request is taken into strong consideration. Days Between Stations new CD In Extremis will go that route. BEST new studio traditional prog-rock I have heard in a LONG time. Let me explain.

Days Between Stations are a band consisting of two musical geniuses by the names of Oscar Fuentes Bills (piano / keyboardist) and Sepand Samzadeh (guitarist). In Extremis is their second studio offering in the duo's decades long existence. I must admit that I was not familiar with the band before receiving a heads up concerning In Extremis, their newest project. Glad I was.

On first play, I knew this was a solid CD. Hit me in all the right places. Not only a solid CD but a solid progressive rock CD. Bonus prize!!

Not only are the core members extraordinary musicians, but so are their friends who help make In Extremis an instant prog-rock masterpiece.  Guest artists that I as a writer for a classic rock station would be interested in; Tony Levin (bass player for King Crimson and Peter Gabriel) and FYI...who appeared on John Lennon's last album; Double Fantasy. Always an honor hearing this man play. Another musician who appears prominently on In Extremis, I was actually acquaintances with; original Yes guitarist Peter Banks. This would be one of Banks last appearances for he passed away not that long after recording his parts.

Doing vocals and behind the drum kit is another ex-Yes player; Billy Sherwood. Oh, and one more guy from Yes, legendary keyboardist Rick Wakeman. To complete the ranks; Josh Humphrey (keyboards), Colin Moulding (lead vocals on "The Man Who Dies Two Times") and the Angel City Orchestra, Brass Section, and String Quartet. Oh yeah, and a Barbershop Quartet. Different seeing that in the credits. And this caught my eye; Jeffery Samzadeh whose credited withSonati vocals.  Yeah...way to go Jeffery!

The first startling sounds of this CD will be repeated towards the end of the opening track. This time having a more commanding presence. A harsh opening, but catchy melody. Commanding drums and epic sounding synth sounds. Plus a choir. I'll call it retro-prog and I'll say they nailed it. I'm sold and it only took the first song. The piece processing is on the quiet side. Where song one (No Cause For Alarm:Overture) had the keyboards dominate, song two entitled "In Utero", has a haunting distant-sounding guitar, as well as some perfect horn work.

In "Visionary", I sensed a bit of a Mike Oldfield vibe. Includes a stand out performance by Matt Bradford on Dobro. Sherwood's vocals are on the mark as always, and his drum work throughout the album is superb.

Track four is a favorite of mine, a song entitled "Blackfoot". It's an instrumental that starts off with a very eerie-sounding piano, like from a horror movie. The song itself has a very cool Porcupine Tree / early Pink Floyd vibe to it. Other songs hint as well of the Big Six in Progressive Rock. Already naming Pink Floyd, the other five are Emerson Lake & Palmer, Yes, King Crimson, Jethro Tull, and Genesis. Helps having musicians who were in those bands play on your album to sound like that. Take Rick Wakeman, I bet he'd be a hoot in a retail store that sells keyboards. Just walk up to a fancy piano or expensive keyboard and start rocking out or playing something classical the average public would know. I'd love to see Wakey and a proper band (Tony Hernandez on drums) in concert do a song I dig named "Call Of The Wild"" in a Walmart parking lot of my choice. Then do all of "Journey To The Centre Of The Earth" for an encore with a fancy stage and light show. On Days Between Stations In Extremis, Wakeman's contributions are astonishing. His performance is worth the price of the CD along.

The Man Who Dies Two Times" is a VERY catchy four minute song that deserves national radio airplay. Special Guest Colin Moulding doing lead vocals, with excellent backing vocals from Billy Sherwood (Ex-Yes / Circa). The music's infectious and "The Man Who Dies Two Times" is indeed a jewel in this collection of new Days Between Stations music. The song has the word HIT written all over it. Stays in your head. Excellent...very well done.  One listen, and I'm sure you'll agree.

"Waltz In E Minor" is a beautiful string piece dedicated to Peter Banks. It's followed by the closing two songs on the CD, both of which include and spotlight recently deceased Yes / Flash guitarist Peter Banks. Track Seven, "Eggshell Man", kicks off at around the four minute mark. Then it's like every additional minute contains something different than the minute before. Different tempos and even styles of music, presented in classic progressive rock style. Helping out and offering yet again one of his best sounding solos is keyboardist Rick Wakeman. His playing on In Extremis, a la Six Wives with a sprinkle of Criminal Record. Rick's fans are drooling reading this.

The last piece is a new prog masterpiece in which Days Between Station named their new CD after "In Extremis". A solemn start which builds to a wonderful climax a little more then halfway in. Sounds modern day mainstream prog in parts. Both "Eggshell Man" and "In Extremis" containing some of Peter Banks best work. I find it befitting that Peter's a part of what I already labeled; "a prog-rock masterpiece."
Days Between Stations - In Extremis CD Artwork: Way cool...very anthology like. By Paul Whitehead.


Rating: Using the one to five star rating system I rate Days Between Stations - In Extremis...5 stars!! The pluses...Tony Levin appears on EVERY song. Perfect vocals performing above average prog style lyrics. I'd go so far to say that this is equal in the awe factor with the best works from whatever prog band / musician I mentioned in this review. That's a BIG one. Based on what I hear nowadays in the world of prog-rock, this album certainly stands out. I predict it will be on a lot of Top Ten New Prog-Rock CDs of 2013. Let's hope us fans don't have to wait multiple years before we get a new studio following this up.
Gary Brown
American Corespondent for Classic Rock Radio Dot EU