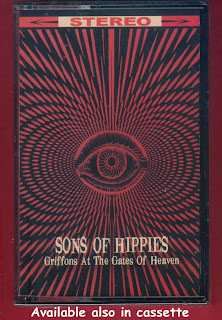 A brand new band has gotten Uncle G's attention. Didn't happen that long ago. Let me tell you all about it.

July Forth and Fifth of this year I spent with my lovely wife Alexandra in Fort Worth Texas. Main reason being so I could review a classic rock band that was playing that night; Nektar. All went well with that. The bands got a healthy momentum to them. Like that Vulcan dude on Star Trek would say; "May they live long and prosper." On the same bill that night; Sons Of Hippies.

First time I saw mention of 'Sons Of Hippies' was on the Internet. The Austin and the Fort Worth Nektar gig both had Sons Of Hippies playing with them. I saw this mostly red colored banner of the bands name on several websites I was checking out. Nice enough sized that it caught my eye. Appeared like a 1970's B movie poster. The ones that had hypnotism. Almost subliminal. Uncle G can catch the vibe. "Listen to Sons Of Hippies" -- Like on Facebook, Sons Of Hippies". The thought went by in a flash. I even saw a green dot that lasted just a split second. It said; "Time to medicate." But wait...that was on the newest released DVD of Cheech & Chong's Animated Movie. Sorry, that's entirely something else. Of course I'm just shitting around. Much like Sons Of Hippies were with me when they had this HUGE burlap sack of what said "Cannabis" along with their merchandise. Yet the smell was kind of faint throughout the evening. Oh well, we were in a TEXAS bar after all.

Note: Sons Of Hippies does seem in my opinion, pro pot, and do mention weed and other mind altering drugs from time to time. As long as we're adults, Uncle G's cool with it.

Two as a matter of fact. Here's the links. Very cool / well done videos. Ones kind of twisted. Both are fun.


The band just released their debut CD on Cleopatra Records called; Sons Of Hippies - Griffons At The Gates Of Heaven. I'm currently giving it spins for an up and CD review. Is sure to be positive. It's a solid CD and a fresh sound. Us older cool folks can and should tell the youngin's. The more MATURE teens and up, they should dig it. A three-piece. A female and two guys. Younger themselves. From hanging out around them be it ever so briefly, I can say as a group they came across as not only entertaining, but determined. Like Muse back in the Nineties, Sons Of Hippies should catch on nicely.