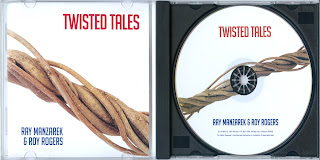 On Twisted Tales, there are only ten songs and they go by pretty quick. The whole recording is just seconds under the forty-five minute mark. Took me a few times to get used to it. Each time when listening I noticed maybe something I didn’t pick off the time before. And not even realizing that the more I played Ray Manzarek & Roy Rogers – Twisted Tales (2013), the more I liked it.

A shame but this is Ray Manzarek’s last project. He passed away before Twisted Tales was released. A Rock n’ Roll Hall Of Fame member for his contributions while with a legendary band called The Doors. Ray’s keyboard work for now and forever containing some of rock’s best-remembered melodies. The good reviews for Twisted Tales I can only imagine would blow him away. Mine being one of them.

So Mr. Manzarek and a man he collaborated with before, Roy Rogers, along with some other fine musicians made Twisted Tales. Ten songs with lyrics that paint pictures, for ‘tales’ are stories and here for our enjoyment are two shy of a full dozen.
Now I love a good yarn. Back when I was a wee lad, a detective from across the pond captured my attention whose name was Sherlock Holmes. He caught Ray's attention too for he wrote the music and Jim Carroll the words, to an upbeat starter called "Just Like Sherlock Holmes". Must say I liked it clean away.

Our second offering is music written by master slide guitarist and whose name is right next to Manzarek’s on this project, Roy Rogers. Lyrics are by Michael McClure. "Eagle In A Whirlpool" is a fun, up-tempo honky tonk like song.
The other eight songs are all along the lines of what a Ray Manzerek fan would expect. Not only superior musicianship, but entertaining words / lyrics to go along with it. Which leads me to track three and a tune called "Cop Talk", with lyrics that contain a real LOL moment:

“My snitch lost his alibi / too bad he had to die
First he tied her to a tree / the time of death was 8:03”
There I was. While driving an automobile, and just me in the car, cracking up to myself just a laughing and listening to this purely entertaining song. “Cop Talk” words are by Jim Carroll. A catchy chorus with great music throughout, including standout saxophone by George Brooks.

If I had to pick a favorite, track seven would be it with a song called "Black Wine – Spank Me With A Rose". Very much in The Doors vibe with wicked guitar work by Mr. Rogers. Once we've gotten well enough along is where you're hear the words; "Spank me with a rose." I went around the house for days having fun signing that. As long as there were no thorns, why not. But I'm not picking up the pedals off the floor. Have to draw a line someplace.

Rating: Using the one to five star rating system, Uncle G gives the new Ray Manzarek / Roy Rogers – Twisted Tales…five stars!! Again, if you know either of these gentlemen’s music then you know what you’re getting. Certainly there is no disappointment if you are already a fan. And if a new fan of either musician or both, then you'll dig the "Twisted Tales" that this collaboration brought forth. I sure have.