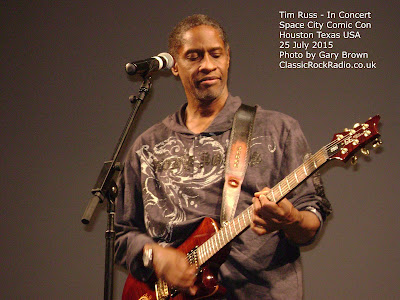 So I arrive on Saturday at the NRG Center building, which is next door to the old Astrodome, and where this years Space City Comic Con is being held. This is now my third day in a row driving here. Am getting to know the parking lot attendants pretty good. I feel sorry for those making a buck outdoors. The end of July in Houston, Texas and the heat can literally kill you. In the 90's and it's only early in the afternoon. The heat index pushing it to the 100's. Events and such are hot inside too, just not enough to burn you.

Inside there are people all over. Countless of CosPlayers walking around, and several of the ticket buying public, dressed in some kind of cool costume having to do with the convention. Seemed to be more in attendance than the day before. Still early afternoon. The day for me covering Space City Comic Con has begun. I go kill a twenty dollar bill getting a chicken sandwich, and down a cold Samuel Adams Boston Lager.


Tim's performance is said to be started around 6:45pm that evening. In the meantime, I hang out, talking and having fun at the various booths and attractions. Getting around show time, I go upstairs and get in line. Sometime right before doing this, I took a break. Had another cold Samuel Adams Boston Lager. Now waiting in line patiently, and guess what? All that beer needed to make it's way out of me. Nature calls, I go do my thing, and on the walk back pass Space City Comic Con guy Devin Pike, in which we exchange pleasantries. The closer I get, I start to hear familiar music. Oh shit! Tim's show has begun. I enter the hall, and am lucky to get a seat pretty up close. It's the first song, and Tim is entertaining the crowd with a song off an album he released in 2012 called; Tim Russ - Then & Now. The opening number; Stand Up & Be Strong. 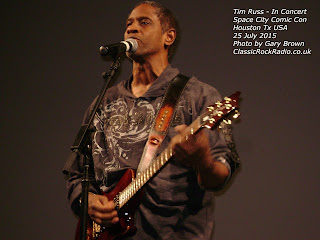 Now just so we're all on the same page, and I hate to mislead anyone, what I'm witnessing here is Tim doing live vocals, and playing a plugged in borrowed electric guitar. All other accompanying music is previously recorded. Canned music you say? I first heard Keith Emerson and Greg Lake do this on a tour they did a few years back. No drummer, so what you heard was a drum track the two musicians played along with. You'd think at first maybe this wouldn't be cool somehow, but it was. We're not talking pop Goddess Britney Spears and accusations of her lip-syncing. Tim's singing was spot on, one song after the next. And his guitar skills are phenomenal. FYI, Mr. Russ was a professional musician before he was a paid actor. Been playing since a kid, and believe it or not, Tim is approaching age sixty soon. He's for sure a professional musician who mastered the ax, and appears to play now with admirable ease. I got the same impression when watching Roye Albrighton of Nektar play when I saw the band in Fort Worth Texas, back in 2013. I watched Michael Bruce of the original Alice Cooper band pick up an electric guitar that wasn't his, and after not playing for months, make the damn thing smoke. Shows what hard work and dedication can do. Seriously, you're either a guitar player, or you're not. It's a skill, that to me improves with age. I already knew Tim played well. Getting an opportunity to see the man play in a live setting was the main reason for me wanting to cover the convention to start with. Glad I pursued it. That, and the whole Space City Comic Con was a whole lotta fun.

Tim ROCKED! He did about a forty-five minute set. Mostly upbeat old school style RnB music. Covers and original music. Perfect for a performance such as this. Not really your normal concert crowd. No smell of herb in the air. This was one event of many at Space City Comic Con. A three day extravaganza for people of all ages. The show was free to all who attended. This means little seven year old kids were standing up dancing, while us older folks was grooving in our seats. It appeared a good time was had by all. Went by super quickly, which means I must have really enjoyed the hell out of it. 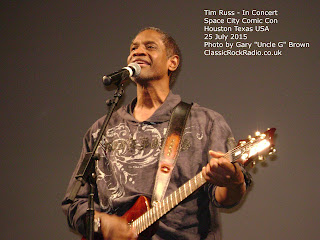 Tim's music can be found in various places including iTunes, and CD Baby Dot Com. That's where I got Tim's latest CD called Lifeline, in which I reviewed favorably this past June.

Star Trek: Renegades - One of Tim's latest projects. A proposed television pilot. Received well at a premier showing just this past weekend. Mr. Russ reprises his role as Tovok, in a story that takes place a decade after Voyager's return home from the Delta Quadrant. The cast includes many Star Trek alumni, and cool new additions to the Star Trek Universe like televisions Xena's, Adrienne Wilkinson. I talked to her at Space City Comic Con briefly. Super nice young lady. Kick-ass actress.

So if ever a Star Trek fan of any series, or if just getting into the monumental first show starring William Shatner, or any of it's offshoots, then please take a few seconds and please support the purposed show. In my opinion, 'Star Trek Renegades' would make a welcome addition to the official franchise. Besides, it's been too long (ten years) since 'Star Trek Enterprise' ended its run. The world needs a new Star Trek television program. Is only logical. So lets all wish Star Trek Renegades luck. BTW...The pilot is directed by Tim Russ. As is this music video for the program in which I'm all too happy to include in this report. The song, Captain Of My Soul, by Automatik Eden.

Official Website for Star Trek: Renegades (make sure...check it out)

ONE MORE THING - A Fun Tim Russ Fact - Yes he was in Sharknado 3: Oh Hell No! (2015 The Asylum) playing the part of General Gottleib.