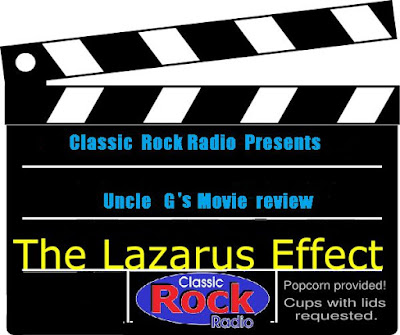 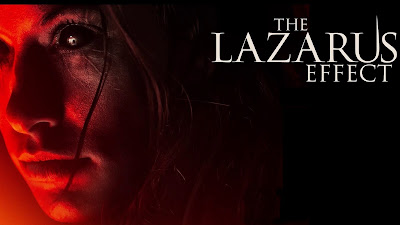 Available at the local Redbox Rental Machine, and kind of new at the DVD / Blu-ray stores is a horror film that came out this past February called; The Lazarus Effect. The trailer caught my eye. Rented the Blu-ray version this past Monday night. Dinner and a Movie Nite, with the main course being Mexican take out from a place in Katy called, Taco Cabana. I luv their fresh tortillas.

The Lazarus Effect has a small cast that stars Olivia Wilde. She's another reason why the film made my radar. Olivia played a character (Remy "Thirteen" Hadley) on TV's House, M.D. I caught the entire series on DVD. Took me a few years. Research credits Olivia with being in 81 episodes, out of the 176 that made up the entire television program. Hard to believe I watched eighty one of anything, yet along a whole series that produced 176 hour long episodes in total. I credit that to good writing, as well as good acting. It was an entertaining program. And Olivia I found by watching all her performances on the television drama, to be a very good actress. Plus she's very pleasing on the eyes. Not sure if I would have rented The Lazarus Effect if Olivia wasn't in it. She's certainly a draw.

What we have is a small group of eggheads in their 20's / early 30's from some fancy university, that when trying to develop a serum to prolong death so Doctors can have more time to save lives, instead comes up with a drug that not only brings back the recently departed, but makes whatever they shoot their new drug in, a seriously scary version of their former self.

Filmed well containing both suspense, and downright scary moments. The writing is good. Includes a talented cast who pull off a wonderful job acting out a medical, what if. Shit hits the fan after Rocky the dog is brought back to life. Wait till a human gets the serum. All HELL breaks out then.

Question: Is The Lazarus Effect worth the two buck I paid renting it for one night? That answer would be; Yes. In 2015, an above average horror movie. Classic story of prolonging death, with a twist. Overall I enjoyed the film, plus I found the score by Sarah Schachner to fit the film perfectly.

Compared to most other films in the same genre, I imagine that if I was sixteen and stumbled onto this movie one late night on a Saturday, that I'd totally get off on it. Older folks might find parts of the storyline, a tad predicable. Still, it's a fun watch.

No bonus features pertaining to the film on the blu-ray. Would have liked to have seen a 'making of' featurette. Something cool when buying the retail version I imagine. Must come with more bells and whistles than just the rental.