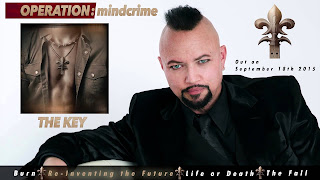 Entitled ’The Key’, the album is the first part of a trilogy from the iconic metal vocalist and initiates that very question within a web of international politics, the world economy and social ethos. Operation: Mindcrime is a creative platform for Tate that continues in the spirit of the classic Queensrÿche album of the same name, spawning concepts as grand as his music and intertwining the intensity of his past with the progressive, provocative mindset that has made him one of rock music's most resolute forces. His 13 album tenure with his former band was marked by exploration, intrigue, bold risks and gratifying results; ’The Key’ continues in that fine tradition.
Joining Tate are a hard-hitting cast of familiar faces and new collaborators: bass players Dave Ellefson [Megadeth, Metal Allegiance] and John Moyer [Disturbed, Adrenaline Mob], drummers Simon Wright [AC/DC], Scott Mercado [Candlebox] and Brian Tichy [Billy Idol, Ozzy Osbourne], guitarists Kelly Gray [Queensrÿche] and Scott Moughton [Geoff Tate], keyboardist Randy Gane [Myth] and vocalist Mark Daly [The Voodoos].