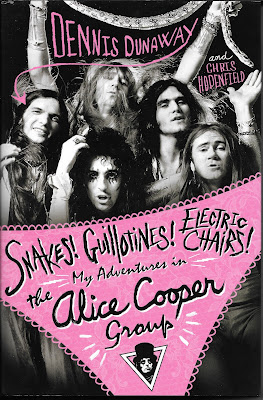 Ordering old school via phone, 'Good Records' in Dallas Texas USA, took my order, and a few days later Dennis' book arrived. I had already seen a picture of the book on Dennis' official Facebook page. First impression was I liked the cover photo, and that the book had eleven words in its title. If on Facebook and being asked if it was a good title or not, I'd press the 'like' button. It clearly gets the point across that this was a book written (with help from C.H.) by the original bass player in Alice Cooper. The one, the only, Mr. Dennis Dunaway.

Now notice that Dennis has the word 'group' after Alice Cooper. It helps separate from Alice's ongoing solo career that started when Vince jumped ship (management in tow) in '75. Since then Alice has had an overall successful solo career that began with the mega successful 'Welcome To My Nightmare' album. An interesting catalog of albums followed. In 2015 we find Alice doing a side project, as part of a supergroup called 'The Hollywood Vampires' that just released their debut, self titled album. Frankly, I feel Alice deserves RnRHoF induction, on his solo career alone. Good for him he's already inducted, and rightfully so for being one fifth of the Alice Cooper 'group'. Which is where getting back to the book, this story ends. Admitted into the RnRHoF back in 2011. The 'group' since then has shown it still has some punch left in them which was apparent at a recent 2015 reunion show / appearances in Dallas Texas (Good Records). Glen was of course missed, but Alice, Neal, Michael, and Dennis played an eight song set that proved something is still there. I personally would luv nothing better than a new 40 to 45 minute Alice Cooper group concept album, and after it's release, a tour. If not wanting to embark on a full size tour, maybe just a handful of shows so to be professionally recorded; Audio & Blu-ray. From my lips to God's ears, there is still time left.

Dennis' recalling of events, lays out exactly how the Alice Cooper group came about. The vast majority of the certain to be, if not already, best seller chronicles mostly up to '74's Alice Cooper Greatest Hits album. Superb cover artwork by Drew Struzan on that one btw. For the 'group' this was pretty much the end. On record the 'group' would not play again and it would be minus GB, until Alice's follow up to Welcome 2 My Nightmare; Welcome 2 My Nightmare (2011).

Snakes! Guillotines! Electric Chairs! My Adventures in the Alice Cooper Group. Dennis Dunaway's personal recalling of his life. A very interesting one indeed. Successful with other bands since his Cooper days, and successful in life with a wife and two kids that has certainly kept him well grounded.

I personally never met Dennis, but I know Michael Bruce, and Neal Smith. I also had the honor of hanging with Glen Buxton when he was in Houston, back in '97. I sat at a table with him and a few others after the Billy Blues show, and was amazed at how well he held our attention. I got to ask him anything I wanted. The dude was so cool and laid back. He sat there attentively as each of the three of us spoke, and then when finished he'd reply. Actually, he used the free time by reaching in and out of this black medicine bag he had with him. In the middle of long answers he's reaching in, grabbing a can of beer or a cigarette, and not miss a fucking beat. He gave responses in great details. Wonderful stories about The Doors, and Kiss.

I made a beer run for GB back when he did the record show appearance, and a cigarette run (Old Gold or Basic's 100) when at Billy Blues. Least I could do for one of my all time guitar heroes.

One of the coolest and then saddest things ever in my life … the Area 51 show, at what would be GB's last ever public appearance. When it came time for the Cooper's anthem 'School's Out', I got to stand directly in front of Glen, as he played those all too famous, first opening guitar notes. A week later, Glen Buxton was dead. I still get choked up when I think about it too hard. My last memory of GB is him being in the back seat of a car, and exchanging pleasantries back and forth. In the rain, the automobile sooner or later pulled away. I believe it was Jeff Jatras (manager of Michael Bruce ) who seven days later told me Glen passed away.

One fanboy moment I had with GB was giving him a tee shirt. Right before the Area 51 show was to start. Was surprised and honored he actually wore it on stage. An attitude shirt I had specially made in Daytona Beach, Florida a few years before that. I never wore it. Hung on a hanger in my bedroom closet. Would scare mothers and children. It read on the upper arm sleeve; "Sticks and Stones may Break my Bones, but Whips and Chains Excite me". On the front of the black tee-shirt; "What are You Staring At Dickhead!" I forget the rest.


My real regret is that I never asked to have a picture taken with him. My wife got him to sign a couple things. Treasured items now. 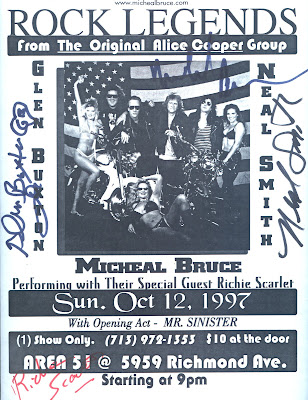 Speaking of the Houston appearence, Michael Bruce's manager told me that he would send posts I authored on Sick Things (a public Alice Cooper Internet Discussion Group) about Michael's playing, to Neal Smith. To help get him interested in coming to Houston which he did, along with GB. Dennis gives him credit for the '97 reunion, in which I do as well. It would have never have happened without his persistence. As for the record, and sorry if it's a spoiler, but Mr. Dunaway was ill at the time, and could not participate in the '97 Houston original Alice Cooper 'group' reunion. Alice wasn't there as well. It was never believed he would show up anyway. Michael, Neal, Glen, with the help of Ace Frehley's bass player, Richie Scarlet, and a local Houston musician playing keyboards and helping with backing vocals, John Glenn could not have done any better. For the short time they practiced, and played together, the five of them ended up a pretty tight band. These guys ROCKED! Weather wise in Houston, all during this time, it rained cats and dogs. A contributing factor I believe to Glen's demise.

Michael Bruce once told me it was always better to take the high road, or whatever you could fit in your pockets. Only kidding! Luv U Bro'! TONS of memories. R.I.P Jeff Jatras. Truth is the man was a true scumbag the majority of the time. Killed himself in 2011. Sad in a way. Many that knew him who upon hearing news of his passing were quoted as saying; "Good riddance!"