A lot of bad news recently in the music world. I noticed this next bit of news, in the wee hours yesterday morning, and frankly wasn't in the mood to help pile on even more evidence of how we all live in an ever changing world. And then I woke up today with not an idea of what my today's column would be about. So, with nothing else in mind, I'll address the subject of the cancellation of one of my favorite cable shows; That Metal Show.

For those not up with the program, 'That Metal Show' is a talk show that centers around three middle aged MetalHeads; Eddie Trunk with co-hosts Don Jamieson and Jim Florentine. Experts in hard rock / heavy metal music. Premiered in 2008. Has so far completed fourteen seasons. The last one airing last May.

Just a few days ago the program got axed. Sad news indeed, but a silver lining does indeed exist. For VH1 according to what I have been digging up, is cool with the expression; "The show must go on." In essence, this means that 'That Metal Show' can be shopped around to other networks.

News of the cancellation of 'That Metal Show' caused Eddie Trunk's website to crash. I'm not surprised. But the way television is nowadays, a cancellation is not a COMPLETE DEATH SENTENCE, meaning that the show, should those involved still be interested, can still go forward. It's happened before. Television programs have been canned, and then picked up by another network. Same identical thing can happen here.

So many cool episodes over it's SO FAR 14 Seasons. Such awesome guests! It's way too early to close up shop here. A unique, and really one of a kind show.

I predict a station like AXS TV (cable) will pick it up. Foolish if they don't, ONLY BECAUSE SHOULD THEY PASS, another channel will be certain to pick them up. After all, 'That Metal Show' comes with a built in fanbase, that's capable under the right circumstances, to grow even more.

Remember what MTV was LIKE before they started playing Michael Jackson videos? AXS TV reminds me of that. I have been watching AXS TV lately. Matter of fact, I just checked out Aerosmith - Live At Donington a few days back. The band kicked ass! Word to the wise, AXS TV has it's moments to where the channel is definitely worth at least keeping up on its schedule.

After all, the world needs to witness more That Metal Show segments like, Stomp The Trunk. Plus, I wanna see Miss Box of Junk, Jennifer Gottlie, in high definition. So news that it was picked up by another channel, and that new episodes will be forthcoming in HD, would be very welcome. I personally enjoyed the shows run, as I'm sure countless of others did as well. 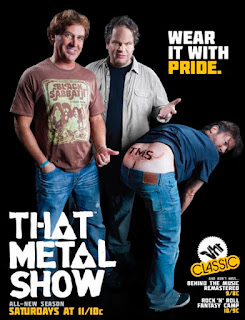 Whatever happens, meaning That Metal Show is off the air forever, or that it resurfaces … we here at ClassicRockRadio.co.uk SALUTE all involved with the program so far. Metal RULES \m/