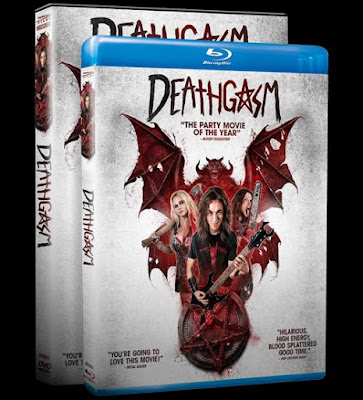 So entering the new year, I decided to drop the streaming service Hulu, and instead, subscribe to Netflix. Doing it old school, receiving discs, and then sending them back after viewing, in the postage free envelope that is provided. Wasn't that anything was wrong with Hulu. Enjoyed using their service very much! Thing is I moved, and where I am located now the Internet service is somewhat spotty at best. Am using my cell phone as a means to get online (tethering). Requires discipline so not to use up all the data I have in a few Internet sittings. Streaming tv shows and movies via my cell phone, quickly EATS up mt data allowance. So as much as I liked being subscribed to Hulu, it just wasn't practical for my new surroundings. Will one day be able to stream unlimited. Just a matter of time my carrier (Cricket) does this, so to compete with those that already do (T-Mobile). Agreed, it does suck being somewhat limited to what I can do online. What can I say? Grateful for what I have until things change for the better.

Ends up the first movie I ordered from Netflix was; Furious 7 (2015). I had watched all the other ones in the franchise. The newest one came out last summer. I was too busy doing other shit, so not able to swing by a movie theather to go check it out. Now since viewed, I can say it touched on being cartoonish / unbelieveable, but like the others before it, didn't let me down. Very entertaining! That and I admit to having a crush on actress Michelle Rodriquez. Rest in peace; Paul Walker.

Being new to Netflix, means starting off with a nice and empty queue. Next step for me was to start filling it up. I'm mainly looking for movies. That's what Netflix is known for right? And Netflix has such a HUGE collection, I really didn't know where to start. Found and ordered 'Furious 7' by putting the title in the search engine. I knew I wanted to see that, before even signing up. First month of Netflix is FREE (hooray). So once that action film was ordered, I asked myself, I said; "Self, what movie do I want to see next, and possibly even type a review for the classic rock station I write for?" 'Furious 7' I watched just so I could chill. Moving took a lot out of me. Seeing a movie while having the intent of also writing about it, are two different things. That's more like work. So with that in mind, I started carefully poking around the movie categories that Netflix had to offer.

One of my first selections was the horror category, and almost immediately the poster artwork for a newly released horror / comedy film out of New Zealand, caught my eye. It's title; Deathgasm. Not knowing really anything about New Zealand cinema, I guessed by looking at the artwork and the brief description, this was equal to what we here in the United States would call a Comedy / Horror B Movie. Think Sam Raimi's Evil Dead franchise. Started off as an independent film made by who could be called back then, amateur filmmakers. Money to pay the bills occured, was provided by private investors. When released, movie goers in general, just ate it up. Spawned two sequels, video games, and a new television program (Ash Vs. Evil Dead) that I have not caught yet, but will.

So what exactly is Deathgasm?

Like I said, it's a new solid horror / comedy film. Written and directed by a real metalhead, Jason Lei Howden, and filmed in New Zealand.

Deathgasm is … a dark tale that centers around teens who are into metal rock music.

Deathgasm is … a cool ass movie that includes good looking ladies, and also demonstrates how to protect oneself from demons, with sex toys. For the females reading this, the guys could be cute looking, or whatever. I'm old school hetero. Am certain the flick contains enough sex appeal for everyone.

Deathgasm is … extremely funny at times, and over the top gross in others. Includes more vomiting that I think I ever seen depicted in any movie.

Deathgasm is … chainsaw action beyond belief!

Deathgasm is … eye candy to the tenth power. The folks behind the scenes did so seriously well, that it's worth reading the closing credits just to see who did what, all the way to the very END.

Deathgasm is … DEMONS! The kind that scare the shit out of people. And very well done special effects that appeared more old school than computer animated. Either due to a tight budget, or an added effort to make the film more overall appealing? The end results work for me!

Deathgasm ROCKS … how could a film about real metalheads not? Volume to eleven! Presented in a way that's not overbearing. Am not afraid to say I dug the instrumental labeled; The Black Hymn. Has a certain Black Sabbath vibe to it. Being a reporter on classic rock, it's a popular notion that the band from Birmingham (UK) gave metal it's birth.

Deathgasm is … pot friendly, as one might expect when about heavy metal rock music. For the film over all don't stereotype or make fun of metalheads, but instead tries to show what being a metalhead is sincerely all about.

Deathgasm is OK … with casual sex as well. On the flip side, Deathgasm is not too nice to the religious couple, that Brodie, a main character, is assigned to live with after his Mother goes on a Meth binge. Their son, Brodie's cousin, a bully / piece of shit. All three in this family unit, are heavily into casting judgement on others. A good story within a story.

Deathgasm Blu-ray Bonus Features … are very well done. Nothing bored me. Coming attractions / movie trailers was wicked as hell. Informative and entertaining behind the scenes featurettes. I dug the Director / Writer Commentary by Jason, who provided much behind the scenes detail.

In total, I watched Deathgasm three times; two regular and one with commentary by a very promising, up and coming director / writer; Jason Lei Howden. Dude, did an incredible job! Got my attention like legendary John Carpenter did with Halloween (1978). I'm looking forward to many good things coming from Mr. Howden as time marches on. I foresee besides other well made films about other topics, multiple Deathgasms in Jason's future. Hopefully each as mind blowing as the original.

Using the one to ten star rating system, whereas one star means it's not worth demon snot, to ten starts which means it's cool to spend your well earned money on it, Uncle G gives Deathgasm … 10 stars! Remember, I viewed this THREE times. I hardly ever watch a movie, no matter how good it is, twice. Seriously, I can't think of any way to improve what I experienced giving multiple views to Deathgasm. Mister Howden did his job, very well. As did the cast and crew. Best actress in a horror / comedy film award needs to go to Kimberley Crossman. An outstanding transformation starting from being a bully's girlfriend / metal virgin, to Brodie's old lady / metal expert. My favorite scene involves her and an ax.

Tomorrow my Blu-ray disc of Deathgasm goes back to Netflix. I understand the films being sold at local retailers and at a reasonable price. For those who collect, it's worth getting. For those into this type of entertainment, easily understood after witnessing for yourself.

Note: Deathgasm was re-named for Walmart distribution; Heavy Metal Apocalypse. Besides the name change, new cover art was created removing any signs of what they believed to be heavy satanism. This is censoring / censorship. In the new poster art, a GUN was added. Possible product placement? Uncle G feels this type of behaviour, is totally unnecessary. In 2016, people realize that a movie like Deathgasm, has a primary purpose to entertain. Not to freak out Christians. This is all in good fun ... period. Good news is no matter what Walmart calls it, that it's STILL A SOLID MOVIE \m/ 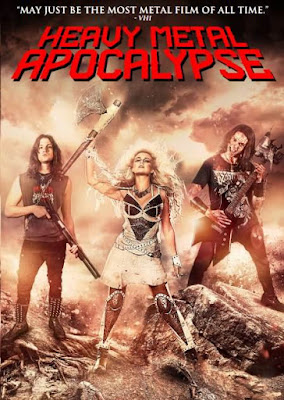