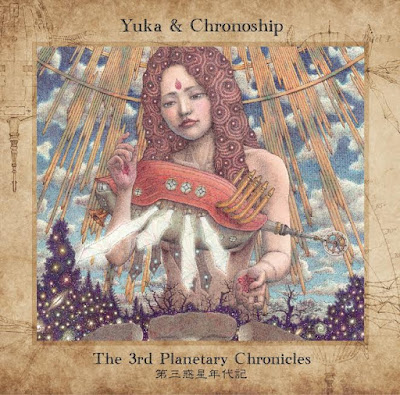 One of the best decisions that I so far made this new year, was open the Yuka & Chronoship CD that arrived with a stack of other CDs one day in snail mail. Not a return address on the package. Postmark from London. Yuka & Chronoship are from Japan. I was born in Florida, but that don't really matter or pertain to what's going on here. Whoever in the U.K. stuffed that padded envelope, and sent it my way, hit the nail on the head, at least with Yuka & Chronoship. I now have a favorite new modern progressive rock band out of Japan, and a CD that I seemed to have fallen into. Nice when that happens. A shame I didn't learn about Yuka & Chronoship then before this. Founded in 2009, what I'm listening to now from them is actually their third studio release in which is entitled; Yuka & Chronoship - The 3rd Planetary Chronicles. A wonderful album. Let me explain why.

First off, the band is a four piece that centers around a very talented woman keyboardist, whose name is; Yuka Funakoshi. Story goes, Yuka who already having over a decades experience in recorded music, wanting to expand on her musical ideas, created a band. Three gentlemen, all experienced studio musicians, answered the call, and thus Yuka & Chronoship was born. Online reviews rave about their first two studio releases. A fan base was developed that's strong enough to help support money wise with the making of this release. Those people who help fund, their names inside the CD booklet. I might have given a few bucks myself if I would have heard of them by that time.

Let me introduce everyone in the band.

All songs on The 3rd Planetary Chronicles arranged by Yuka & Chronoship.

A concept album that's all about the planet us human beings call home; Earth. Told more in song, then in words, which works perfectly for this reviewer.

The opening track, Birth Of The Earth - Collision, did it's job, and caught my attention. Haunting piano, and a melody that gets revisited, and built on throughout the album. The entire album clocking in just under an hour. Twelve tracks that plays best when listening to it as one solid piece of music.

The second track called Stone Age, is where the rest of the band comes in. The opening track only a little over a minute long. By the end of the second track which clocks in at eight and a half minutes, I was hooked. Keyboards, electric guitar, accompanied with drums and bass that make you take notice. The other three musicians joined and complimented Yuka's playing to a tee. Yuka's playing a mash up of several styles, and on this album, a perfect mix of piano, and keyboards. Over all her skills as a player and composer, just blow me away. Several melodies of several songs throughout the album end up being earworm material. Frankly, every track on 3rd Planetary Chronicles has something going for it.

If not Yuka's playing, in which the music created primarily centers around the piano / keyboards, it's Takashi Miyazawa's guitar skills that will draw you in. At first his playing reminded me of Spocks Beard's Alan Morse. A little deeper into The 3rd Planetary Chronicles, and I can hear traces of Pink Floyd's David Gilmour. Takashi's playing comes across as precise, and masterful. Easy to understand why Yuka would want him in her band.

Shun and Ikko make a fantastic rhythm section. Like Takashi, they compliment Yuka's playing, and more importantly, help her bring out the best in her compositions.

Very hard to pick three out of the twelve. Played from start to finish, I find the album on the whole, to be a masterpiece. Occasionally a person or persons do something extraordinary. In the musical world, it's all really a matter of taste. The kids would label this neo-prog. It's a direction I like to swing. Yuka & Chronoship - The 3rd Planetary Chronicles is everything I want in a prog-rock album. Most of all, it really rocks. In my mind, it's hard to get any better than this. The music flows naturally. All twelve songs play as one.

I would luv to hear a isolated piano / keyboard track for track four; Galileo II - Copernican Theory. The rest of the band does a great job in highlighting Yuka's playing. I try following her note for note. Almost six minutes, a demonstration of Yuka's playing skills that leaves me in awe, each and every time I hear it. So impressive!

Track ten on The 3rd Planetary Chronicles is called; E = c#m … an instrumental rocker that showcases not only Yuka, but the whole rest of the band as well. The first song I gave a repeat play to when playing The 3rd Planetary Chronicles for the first time. The songs high energy, has a fun vibe, and displays superior musical all throughout. A fun song, and a given to be performed during live shows. Neo-Prog … check! Turn up the volume! Crowds should really get into it, as they should the whole new album. Again, hard to pick the Top 3. Example, I think the four 'Birth Of The Earth' segments deserve their own award. In the same ballpark as Pink Floyd's Shine On You Crazy Diamond (all parts). Any serious prog-rock fan, can't not LIKE this.

Age Of Steam: From mellowness to rocker, this song has it all. Including lush vocals compliments of Yuka.

Using the one to five star rating system, whereas one star means it's horrible, to five stars meaning it's OK to spend your hard earned Yen on it, Uncle G rates Yuka & Chronoship - The 3rd Planetary Chronicles … 5 stars! How could I not? My advice would be to not only aquire the album, but any back catalog Yuka & Chronicles albums as well that's not already in your collection. Sorry it took this long for me to find out about Yuka & Chronoship. In a way it just goes to prove that good solid rock (prog-rock especially), no matter where it originates on this planet Earth, can't totally escape me. Sooner or later, if that outstanding, I'll find it, or it will find me.