Uncle G Revisits_King Of The Ants 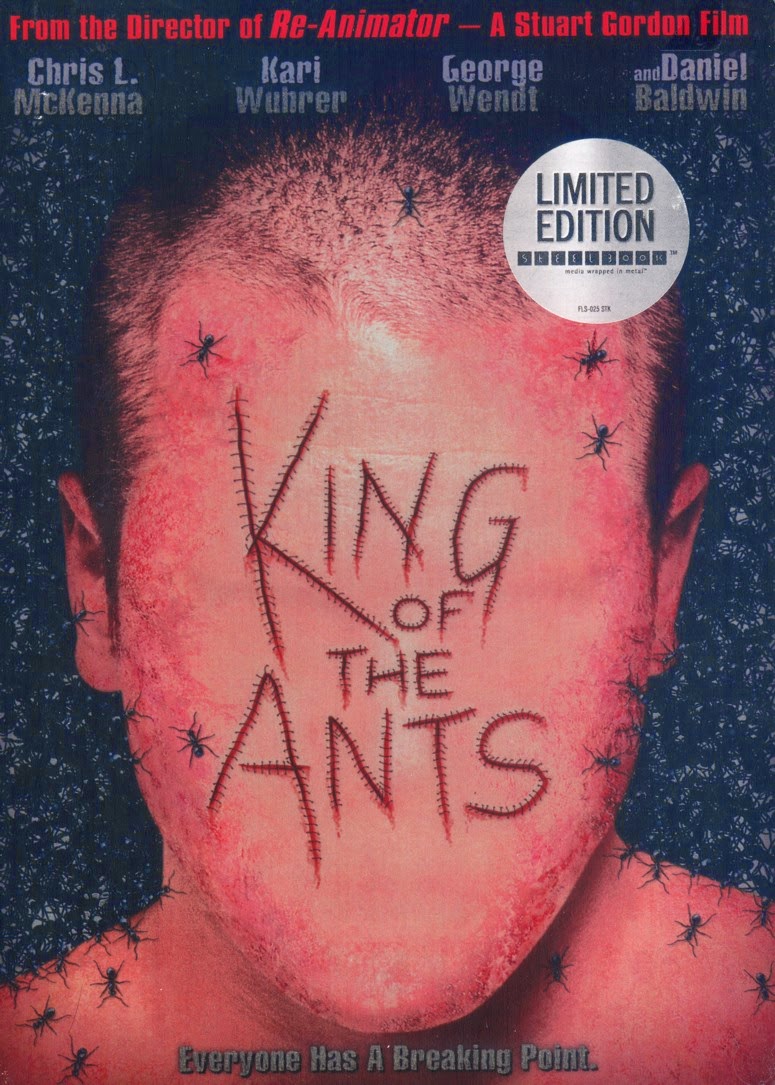 Spotlight: King Of The Ants (2003_Produced by The Asylum)

Was bored, so I decided to chill out some and re-watch a film I enjoyed viewing a couple years ago. Does NOT happen ​that often. No matter how good a movie was, once I see it, I'm done with it. ​For the most part anyway. I know people who watch the same flick dozens of time, or more. These folks should be ruled braindead. Uncle G says enjoy the human experience for what it is, and carry on. ​No one really needs to see Star Wars fifty times or more do they? Occasionally I get an itch to see something again. Perhaps it was, THAT GOOD! It helps that I see movies as art, and not just entertainment. So it's possible to leave open the door so to return, and get into that vibe again. Catch, has to be something about it that would make me want to view it twice.

Now last week I watched for a second time the 2003 classic Full Moon Features film, Gingerdead Man Vs. Evil Bong. To help refresh this 53 year old mind for when Evil Bong 420 comes out. On April 20th of course! This year! Just DAYS away! This movie here, King Of The Ants, is a real turn around from the stoner horror comedy flick directed by Hollywood's legendary producer and director, Charles Band. This is a drama. I seen it described as a; "character study." Sure...human beings run amok. Be warned for this motion picture is violent. The official movie trailer I provide here will clearly demonstrate that.

For your reading pleasure may I please submit to those spending time time here @ ClassicRockRadio.co.uk ... a review of 'King Of The Ants' that I wrote for some friends, and then posted on the ClassicRockRadio.co.uk official Facebook Page, back in 2013. It's a solid ​adult ​film. ​Know ahead of time, what you see will be disturbing, and certainly NOT for children.

I found the DVD for Stuart Gordon's King Of The Ants at Fry's here in Houston. Packaged in a limited tin case. All that, for ONE DOLLAR. May I add, in brand new condition. With it being a Stuart Gordon film, how could I pass that up?
​
After all, the man directed one of my favorite Jeffery Combs films; Re-Animator (1985). As for the reason why I can purchase King Of The Ants for only a dollar is beyond me. Having sales experience, I know the sales concept of whoring out an item, so to attract attention. On sale with a handful of other not as known to the public films. Perhaps a print ad or website BLOW OUT? As far as I'm concerned...lucky me. With sales tax added, the grand total; $1.08

This is a solid film. One of those you watch, and then don't forget. Certain scenes after viewing, embedded in your mind, forever. By the time ​The King Of The Ants was over, I felt like I haven't only watched a movie, but survived a very perturbed human experience. One filled with scumbag people, and the nasty acts they do. In the center of this, is a main character that leaves the viewer of the movie, confused as if to root for him or not. For what we have here, is a revenge film. Here's something weird. Make the main character anti-social. Now one can also take some satisfaction in his pain and torment. The thing is, his tormentors are bigger assholes than he is. The pleasure they take in their amateur and primitive method of behavior modification, is disturbing to view. Even with the victim processing a personality one normally would not care for, the savagery he endures automatically begs for payback. Besides, that's what a revenge movie is. The title King Of The Ants, an insult bestowed on him by the character (Wendt) who sets up the seemingly dimwitted patsy. It's logic and an attitude like that which ultimately become his and his fucked up business associates downfall. Unusual as it sounds, by the time the film over, their is a feeling of satisfaction presented. Up to the individual viewer as to accept it.

A tight story. Believable acting. The film runs smooth start to finish, meaning there were no boring, or unnecessary scenes. It's a ​human ​horror movie in the same vain that the 1978 rape / revenge flick; I Spit On Your Grave​, is​. The behavior the director of the film, Stuart Gordon, puts on display before us is horrifying in the fact that something like this, could really happen. Drifters with lower than average IQ's could be taken advantage of. Used as killing machines. When finished, erase the memories along with what little intelligence they have.
​
The late ​H.R Giger's monster in Alien, odds are won't really be chasing around any young woman in her panties soon. Let alone in outer space. ​That's all make believe. ​King Of The Ants tells a tale that if one dwells on it long enough, can conclude what we're witnessing isn't really that far a stretch from the everyday cruelties that happen on the Earth everyday. Read the newspapers.

So, was the film worth a dollar? Hell yeah it was. Using the one to ten star rating system, I give Stuart Gordon's King Of The Ants, a solid 10 stars. I believe the director to his best ability, made a motion picture that leaves nothing to improve upon. To compare...Death Wish (crime thriller; 1974) was an intense movie. In photography and story presentation, this is just as good a film, if not better. So if you missed Gordon's 2003 motion picture King Of The Ants the first time around, you now know it's worth adding to your DVD watch list. Not on Blu-ray yet that I'm aware of. Deserves to be.