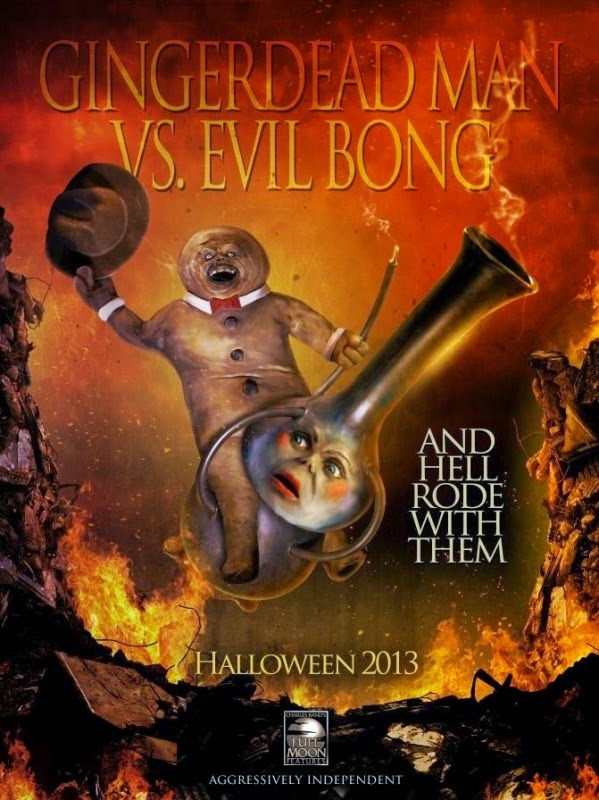 In the minds of other adults, the movies I tend to watch and enjoy the most, are garbage. Not that their opinion bothers me any. Remember the old saying; "One man's trash is another man's treasure." Pertains to the visual arts as well. For I don't sit in front of a wide screen at home, and spend part of the precious time I have left living on this planet, focused on being educated, or enlightened about whatever subject the customers at my closest Starbucks think I'm suppose to be aware of. Don't get me wrong. The arts in and by themselves be it paintings, photography, or film, can be an excellent teaching tool. Sometimes I just want to chill out, and decompress, without any meaningful messages. Let my brain take a rest, so to speak in a stress and pressure free enviroment. To be able to stop focusing on the grown up stuff, and let the spirit of the teenager that still lingers inside each and every one of us, come out and play.

When it comes to checking out movies nowadays, I'm old school. Besides on the silver screen, I still enjoy the delivery system of DVDs / Blu-rays. Streaming is OK. I subscribe to Netflix, and Hulu Plus. On discs, one can take in the main attraction along with special features found only on DVDs / Blu-rays , that can make for a cool and a very relaxing evening. Along with some good munchies and whatever adult libations one is into, a mini two to three hour vacation (my limits of being in front of a television) where wondering about paying bills, or how you're going to keep the car in good repair, isn't anywhere on the itinerary. FYI, a perfect evening for me in front of the tube would be before the main presentation, to watch a Three Stooges short (with Curley), and a cartoon that was hand drawn by a team of real animators, and not created on a computer.

For those who are just getting to know me aka Uncle G, the type of motion pictures that I consider FUN to spend time with would be; science fiction / horror / comedies. Some drama and thrillers catch my attention, but I don't make it a habit watching them a lot. Since I'm an adult, I prefer R rated films. Now to make it interesting, add the word; independent. In the world of motion pictures, this typically means; NOT involving BIG Hollywood. From experience I'll tell you it feels good to cut the ties that bind. And remember, you can always go back.

In my opinion, those who compare Indy B films to BIG Hollywood productions, just are not being fair. Yet people do it everyday, especially while online, and on some website where they believe what they say, really matters. Sure, there is a downside to not having as much time that is needed, along with the proper financial backing to make something the general public erect shrines (fan websites), and throws considerable amounts of their hard earned cash at. I'm consistently surprised by B film studios like The Asylum, Troma Entertainment, and Full Moon Features, and what they can do on a shoestring budget. Results vary. Compared to all the money needed for the next James Cameron creation that will be number one on whatever weekend it's released, 'indy' movies generally impress, and entertain me. Imagined and created by people who are genuinely devoted to their craft. In professional Film Land, this is usually where those fresh from school, the so called amateurs, become professionals. Many involved have made names for themselves.

A lot of these independent films that catch my eye are released nowadays direct to DVD / Blu-ray / streaming services. Hopefully it pays the bills for those involved. For some lucky movie companies through hard work, and a dedication to their art, they develop cult followings. For example, I've been into Full Moon (Charles Band) and Troma Entertainment (Lloyd Kaufman_Michael Herz) movies for decades now. For myself, the entertainment cycle that started with me watching scary movies via televisions Creature Features (WNEW Channel 5 New York City), or Chiller Theater (WPIX Channel 11 New York City) back in the 1960's, continues to this day. Thanks to Indy movie studios such as those. Another Hollywood B Indy company I seriously like is called, The Asylum. Home of the Snarknado franchise. They also do the cool zombie television show for cable's SYFY Channel called; Z Nation. But did they or Troma Entertainment ever do a full length horror / slasher motion picture about a killer cookie? Full Moon Features has.

Reason for my interest and re-watching of this cool flick from Full Moon Features, is because of my excitement for a new installment in the Gingerdead Man / Evil Bong franchises that once again brings both major characters together in one film; Evil Bong 420. Released this April 20th. It's a given day on the calendar for a stoner / comedy / flick like this to be released to the masses.

Gingerdead Man VS. Evil Bong is an un-rated comedy / horror motion picture, that employs stop motion photography to make it's villains do their worst. Released in 2013, and directed by Full Moon's El Presidente, Charles Band, who besides getting ready to release Evil Bong 420, is now just coming off the success of Full Moon's debut web series show; Trophy Heads. Broadcast on their own streaming service, and via other delivery systems as well. I caught it on the streaming service, Hulu Plus. Fact is Trophy Heads being shown (with limited commercial interruption) on there was the ONLY reason why I first subscribed. Lately I been re-watching Season One of The Odd Couple. Not only funny, but had a very catchy theme song, and cool background music assocated with it.

Two years ago the Full Moon crossover, Gingerdead Man VS. Evil Bong, was released. As a long time Full Moon aficionado, it was everything I hoped for, and more. As of this date, the last appearance of it's two stars, Gingerdead Man, and Evil Bong. Together, and along with characters from each film series, extremely entertaining. Consider it a raunchy comedy. Not necessary to view previous films. Contains past clips so to help the stoners...I mean fans who previously seen it, remember all that went on in each respected franchise up to this point. Up to you if you have not already caught these cinematic creations involving a killer pastry, and a pot smoking apparatus. I'll go on record saying every film from both franchises are worth viewing. Yes, they are a tad silly, and on the flip side, over the top violent. Getting baked sometimes is. Add gratuitous nudity (mostly female boobies and butts), and stir. If open-minded and the unfazed type, you'll likely be thoroughly amused.

Be Warned: Since first catching my first Charles Band / Full Moon movie, back in the days of VHS cartridges, I have been hooked. It's not just the films, but everything that makes up Full Moon as well, including it's hilarious product placement scenes, and in house jokes. I collect some of the studio's merchandise. Get this...I have in my possession ...the star of Evil Bong, Ebbie. The coolest replica. OH, and I have a Pimp Doll with the box autographed by Charles Band himself. Besides that, mostly DVDs. Have been fortunate, and even got a few of these signed by those who were involved in whatever title.

In future columns / reports I'll continue to dive into my previous experiences watching FUN movies, and will try by not only reporting on those above the rest, but try keeping everyone abreast as to what's up and coming. For now … the debut of Full Moon Features Evil Bong 420, directed by Charles Band, is right around the corner. Am already looking forward to sharing my experience viewing it, with the find readers found here on the classicrockradio.co.uk website, our Facebook page, and on Twitter. Till then Everyone; Onward through the fog.