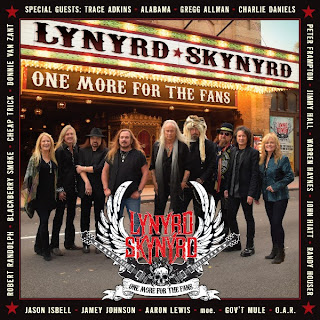 Lynyrd Skynyrd- "One More For The Fans"
AVAILABLE JULY 24, 2015
ON earMUSIC IN COLLABORATION WITH LOUD & PROUD RECORDS AND BLACKBIRD PRESENTS

THE 2CD, 2DVD AND BLU-RAY SET FEATURES PERFORMANCES BY
LYNYRD SKYNYRD
AND A STAR-STUDDED LINE UP OF TALENT

On one special night last November, an extraordinary collection of artists came together at the historic Fox Theatre in Atlanta, GA to perform and celebrate the songs of Lynyrd Skynyrd, one of the most influential bands of our time. This unique concert event centered around performances by Lynyrd Skynyrd, including a special rendition of “Travelin’ Man” with Johnny Van Zant singing along with an archival video of hislate brother, Ronnie performing, as well as a rousing rendition of “Sweet Home Alabama” with Skynyrd inviting the entire star-studded line-up up on stage to perform alongside them.

The show will be available July 24, 2105 as a 2CD and 2DVD set as well as Blu-ray titled Lynyrd Skynyrd - One More For The Fans on earMUSIC in collaboration withLoud & Proud Records in partnership with Blackbird Presents.

One More For The Fans features performances by Lynyrd Skynyrd as well as music legends and young talent, culled from multiple genres including Classic Rock, Country and Americana with Gregg Allman, Trace Adkins, Alabama, Blackberry Smoke, Cheap Trick, Charlie Daniels, Peter Frampton, Gov’t Mule, Warren Haynes, John Hiatt, Randy Houser, Jason Isbell, Jamey Johnson, Aaron Lewis, moe., O.A.R., Robert Randolph and Donnie Van Zant all coming together to perform songs from Lynyrd Skynyrd’s extensive catalog of music.
“Hearing all of these incredible musicians sing our songs was unforgettable,” says Rossington. “It was a really special night and I’m so happy our fans will now get to enjoy the show at home.”
Keith Wortman, creator and executive producer of the concert event, broadcast special and music release worked with Ken Levitan and Ross Schilling who also served as executive producers of the show. Don Was led the all-star house band as musical director for the evening.
As part of the campaign to save the Fox Theatre from demolition, Lynyrd Skynyrd recorded their 1976 live album, One More From The Road, at the landmark theatre. The title Lynyrd Skynyrd - One More For The Fans was inspired by that legendary album’s title.