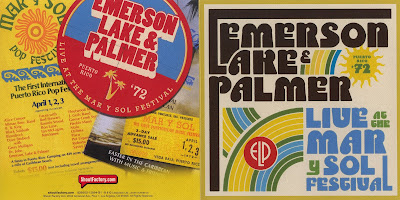 Note: This is a modified version of a column / review that ran as a ClassicRockRadio.co.uk Facebook EXCLUSSIVE, back on June 14, 2012.

Last year (2011) Shout Factory released a sound board recording of ELP from a show performed in 1972. My research tells me this concert was a few months before the release of Trilogy.

Seeing the CD there with all the other ELP recordings really surprised the hell out of me. Here I was walking the CD aisle in Fry's (Houston Texas) last week, and in the corner of my eye, I notice this. Picked it up so I could read the details. The next time it left my hand was when I got into the car. Purchased for a reasonable price.

ELP's act was part of a HUGE three day rock concert. Reading the list of acts that also played there just blows my mind; Alice Cooper, Black Sabbath, Allman Brothers, Dr. John, and Fleetwood Mac -- just to name a few. Plus imagine being able to see ELP. All this in 1972. Now where my time machine go? I could only imagine how cool it would have been to be there. But what about the flip side to these festivals we all hear about? All those people outside for three straight days; smelly, sweaty, and bad breath galore. And lets not forget to mention; drunk, stoned, and wired from getting no sleep. The older I get, the less appealing that all becomes.

The Scan: This cracked me up. The booklet (check out the scan - top of this webpage) includes a reprint of a poster for the event. Price of admission was $15.00, in which it stated, "did not include travel arrangements." Think they had a sense of humor here, or that they were dead serious? To Puerto Rico...right. As wasted as most of these concert attendees must have been, I mean really. Who on Earth would think that? "OK, I purchased my $15.00 ticket. When's the limo arrive to take me to the airport?"

Good news. From what I can tell, this CD contains their whole set. These guys are smoking hot. Really in their prime. This is an EXCELLENT live CD !!! I would strongly recommend adding ELP - Live At The Mar Y Sol Festival to YOUR CD collection if you haven't done so already. Has already received many repeat plays in this household, and I predict will get many more. A real treat!

Rating: Using the one to five Star Rating System, whereas one star means it blows chunks, to five stars which means it's perfectly alright to spend your hard earned cash on, Uncle G rates Emerson, Lake, & Palmer - Live At The Mar Y Sol Festival 72 ... 5 stars! For reasons already stated.