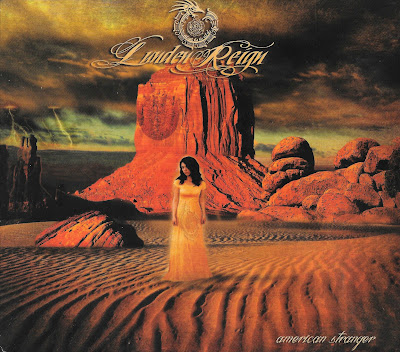 From the great state of California, and what was The Lori G & Nikki Lunden Band, comes; Lunden Reign.

For a modern rock band publicly described as being, big beat / alternative rock, after playing their debut CD many times in a row, I decided what we have here is a new rock band with an appreciation for the rock and roll before them. Touching on old school vibes, yet emitting their own fresh, and unique sound.

First listens and my mind compares the music with; The Bangles, or Heart. Successful musical groups that had a distinctive sound, which earned them as time went by, buckets full of cash, and a rather large following. I feel the same can happen for Lunden Reign. If radio was what it was decades ago when the outstanding bands I just mentioned was breaking ground, I lay two tracks from 'American Stranger' on the general public, and in the process make them stars. That easy. The title track, American Stranger, and what can also be referred to as Track Six on American Stranger, a solid number with a hard edge entitled, Hear Me. Infectious drum beat. Every song on American Stranger deserves attention / airplay. These are just two. And not just for the music, but the lyrics, which can be found to be more real than poems about Egyptians, or magic men.

The comparison is all about Lunden Reign's leading ladies; Nikki Lunden, whose performs lead vocals, and is a keyboardist, and Lora G (Espinoza-Lunden), who's a guitarist, and synth player. I'm genuinely impressed. Saying they play or sound like women who made it to the top of the music heap, in popularity and sales, and actually are life long professional musicians now, is certainly meant as a compliment. It's my job as a writer to describe what I hear. If 'big beat' means 'upbeat' or 'rocking', then I'm hearing that loud and clear.

Tell tale signs you got something. American Stranger isn't too long in length. Ten songs, with the whole disc coming in at around the thirty-eight minute mark. It was recorded in three very cool places; Capitol Records (Hollywood CA), Stagg Street Studios (Van Nuns CA), and Abby Road Studios (London UK). Plus it has very prog-rock like cover art. Works for me!

Lunden Reign - American Stranger is an album / CD easily played from beginning to end. Here is where I would usually say what my favorite songs were, and truth is at the moment, I find it impossible to say what tracks I get into the most. I conclude that I must dig them all! Each one having something special about it. A guitar riff, the vocal performance, a groovy beat, a catchy melody or chorus. Every part is interwoven perfectly with the others. And now that the opportunity presented itself, hats off to the rest of the band, and a word of thanks to anyone I may have left out who made 'American Stranger' possible.

Rating: Back to the business at hand, I'll cut to the chase and say that I now consider myself a fan of Lunden Reign. Am already looking forward to whatever the their follow up is.

Using the five star rating system, whereas one star means it sucks through a long straw, to five stars meaning one can spend their hard earned money on it, Uncle G gives Lunden Reign - American Stranger …5 stars! Had to have seen that coming.