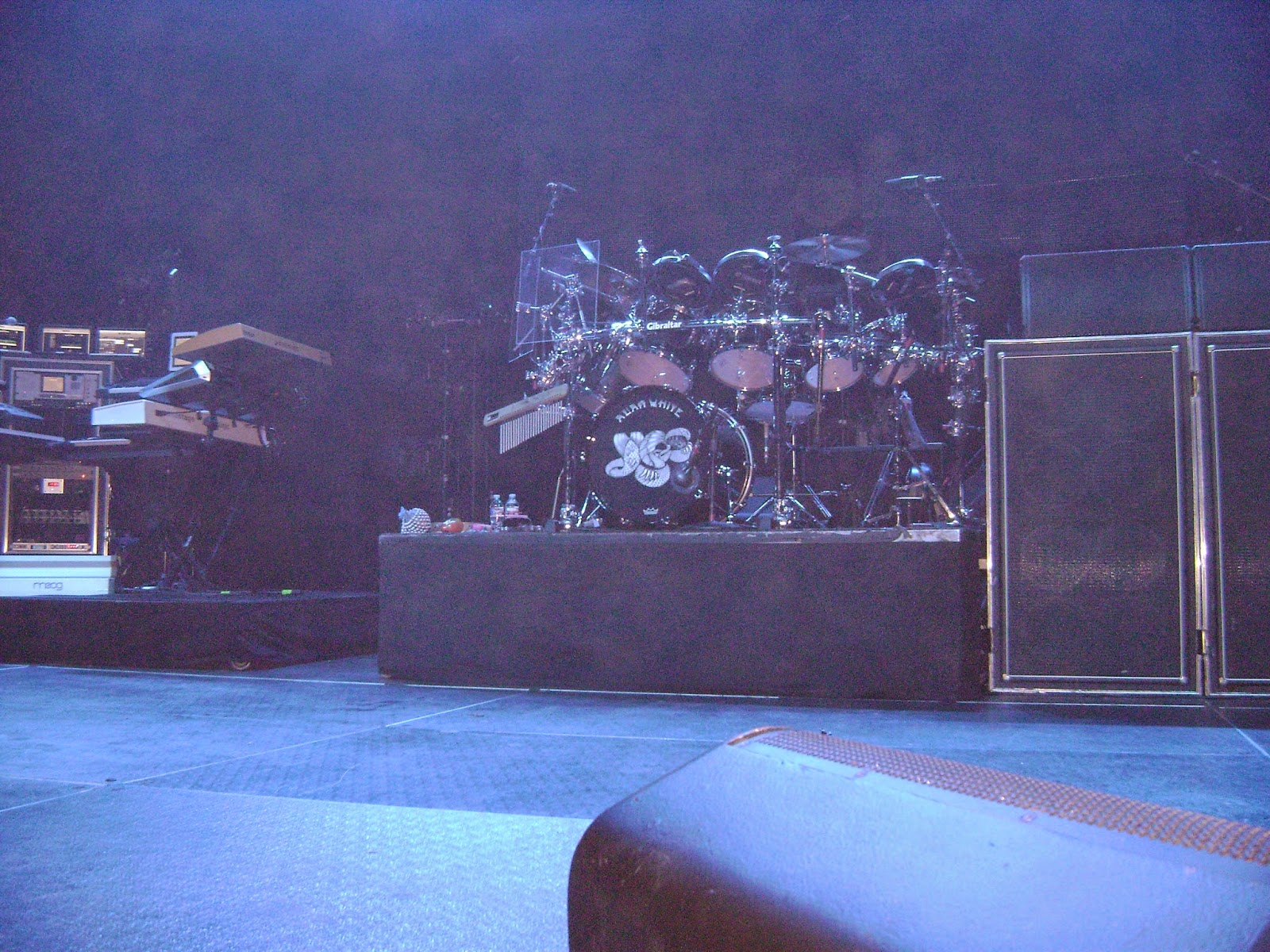 This show was my first time seeing the progressive rock band Yes in about twelve years. Not since 2002, as a matter of fact. The band was playing music from an album they did around that time called Magnification. A wonderful studio album by the way, that I strongly recommend. Some personal changes in Yes has occurred since then. Nothing new to a band that released its debut record in 1969. Ever since their third studio release, The Yes Album, which came out in 1971, many of the most talented musicians in rock music stood under the Yes umbrella. Players come and go. Some even came back and then left again to later on return just so to leave again. Hard keeping up with it's personal. Every position in the band except bass has seen revolving musicians. That's been filled by the very same guy all these years, the very talented Chris Squire. One of Rock's finest bass players, vocalist, song writer, and harmonica player ('And You And I') to come out of the United Kingdom. And if you ever saw Chris in concert, be it filmed or live, you know my words to be all too true describing him. 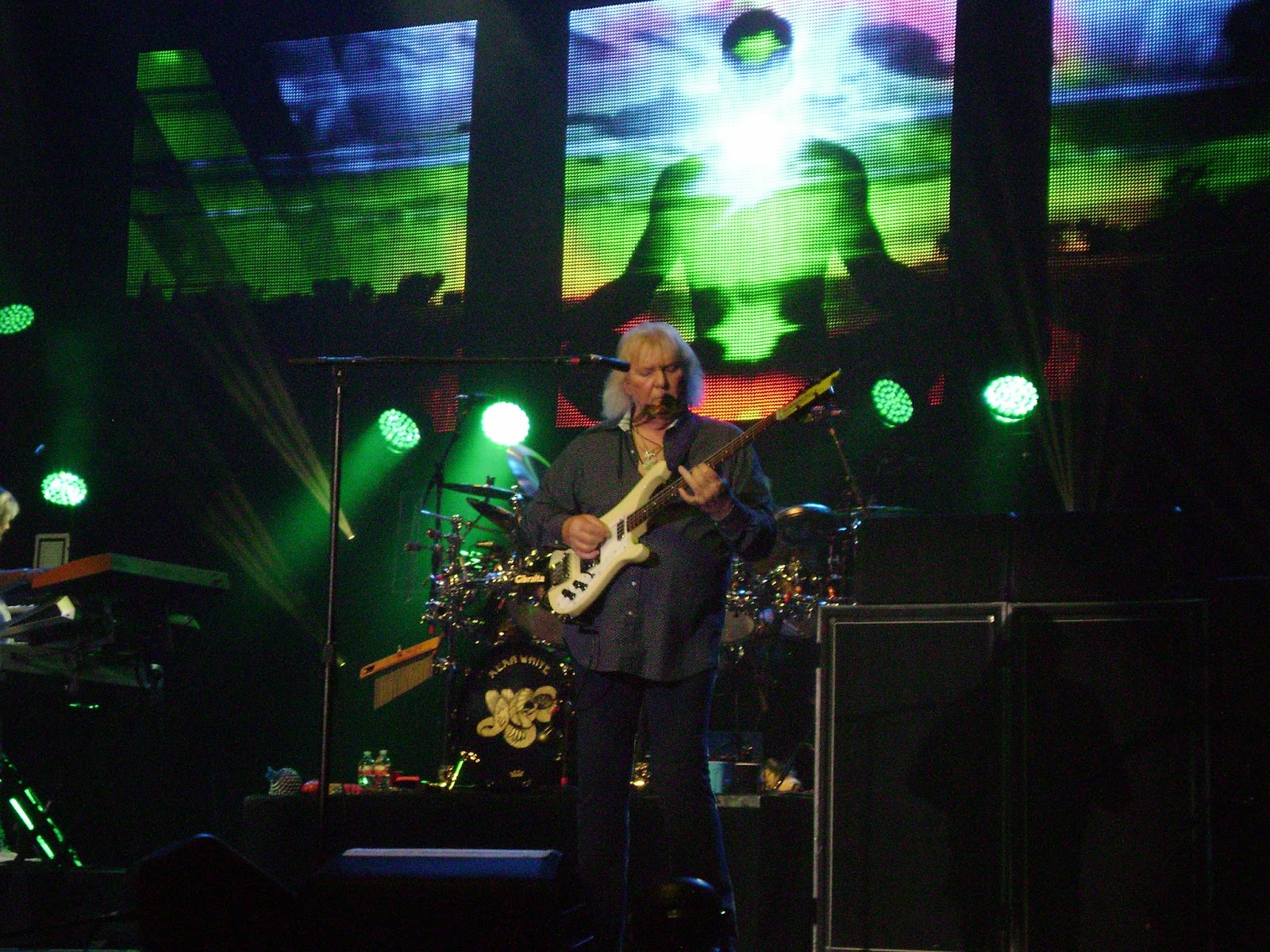 Two other gentlemen who are with Yes presently has also been with the group a very long time. That would be Steve Howe on guitar, and Alan White behind the drum kit. Steve has been with Yes a few years longer, but is yet another member who has come, gone, and come back again. Alan, who also was John Lennon's drummer, stayed consistent with his first studio album with Yes being their 1973 masterpiece, Tales From Topographic Oceans. 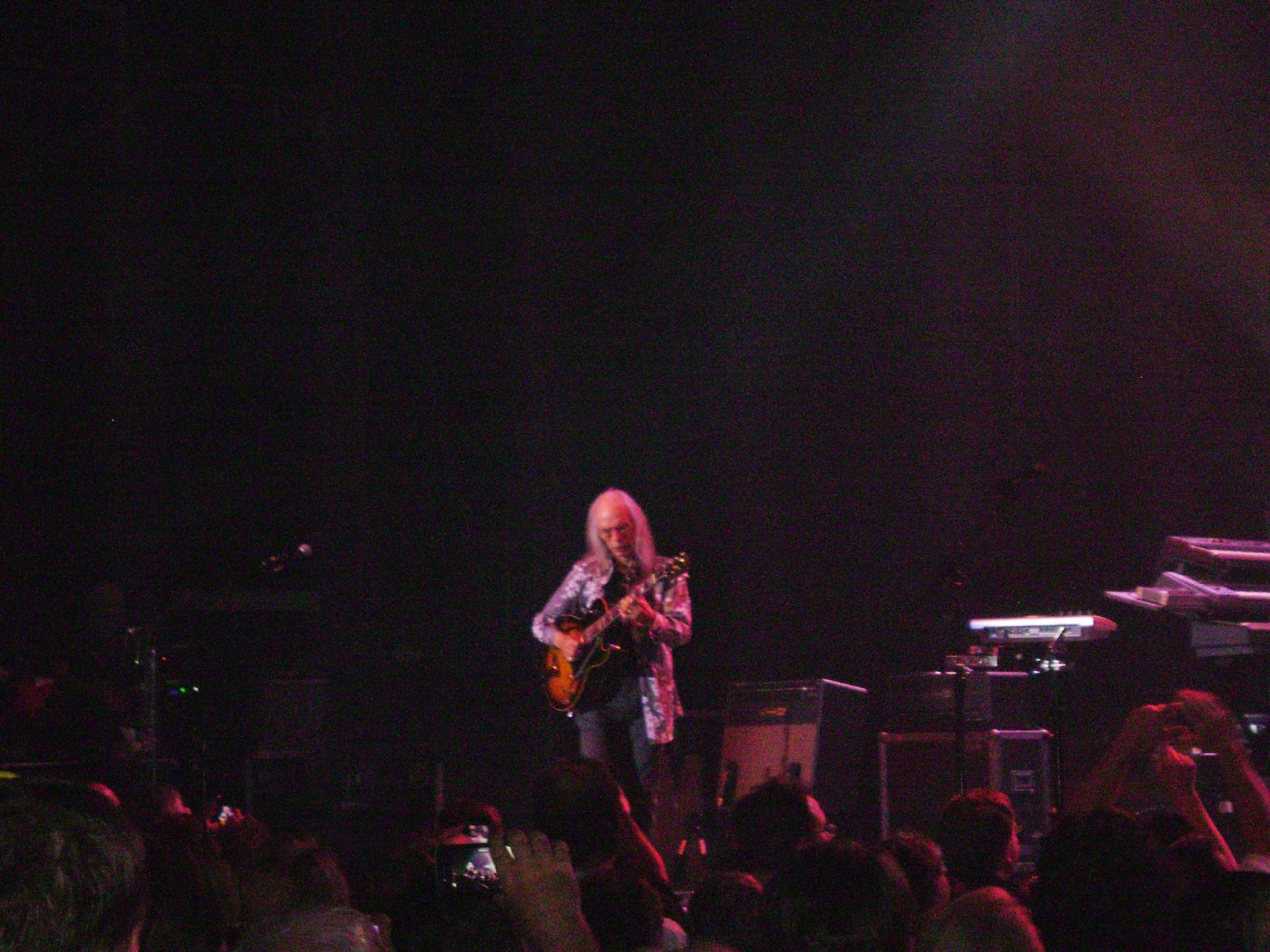 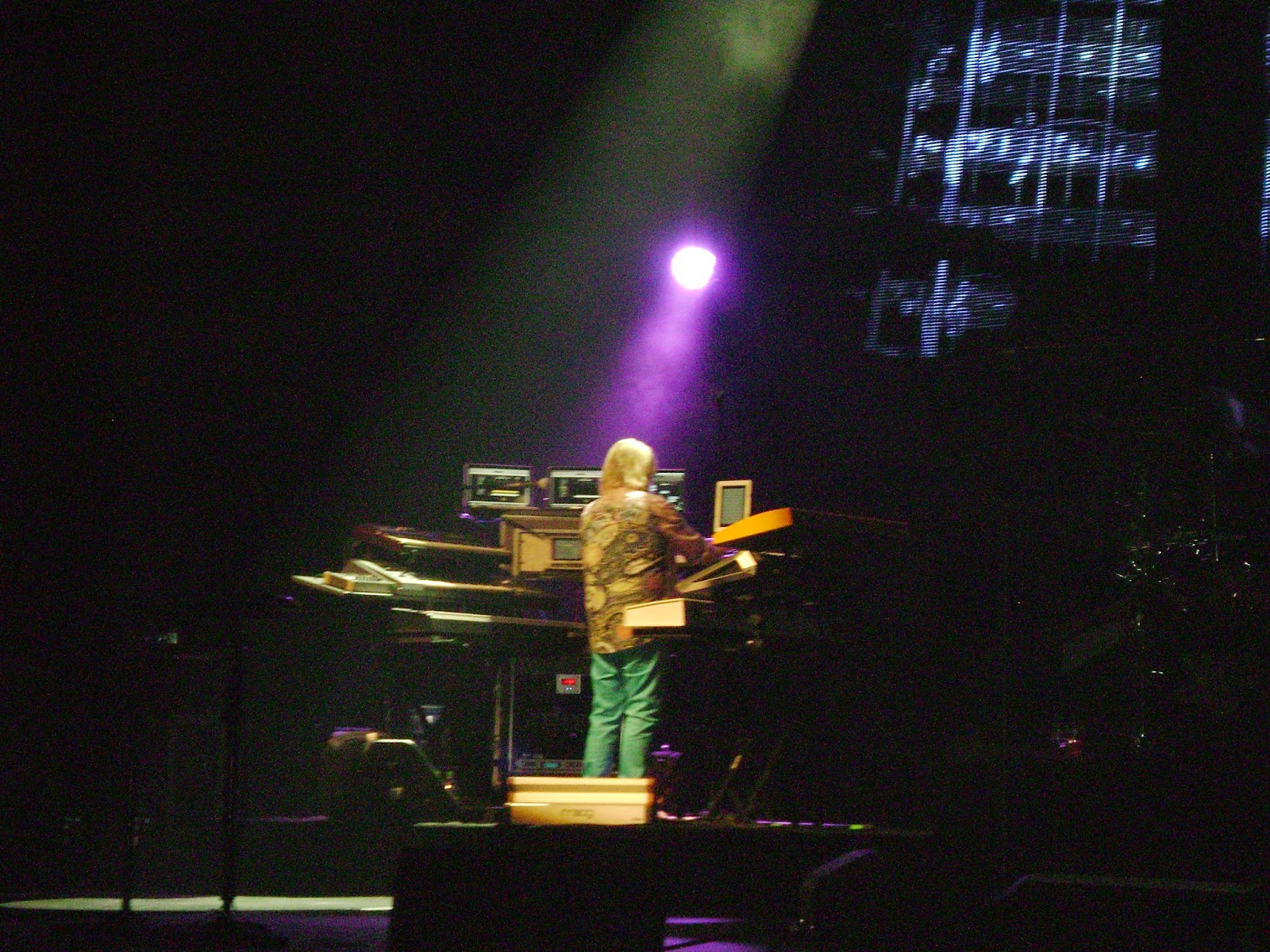 Just so everyone is on the same page, Geoff Downes is Yes' current keyboard player. Like Steve Howe, Geoff had left the band before and is now back again. This was my first time seeing Mr. Downes playing for this legendary prog-rock band. His style with Yes somewhat different than his playing with the band Asia, as I had the pleasure of seeing two times previously, but I'm getting ahead of myself. Rounding out Yes is lead vocalist and multi-instrumentalist Jon Davison. Some might know him from his other band Glass Hammer. He contributed heavily to the Yes' new release Heaven And Earth. The talented Jon Davison did a solid job on that album, and did the same exact thing at the Houston show. 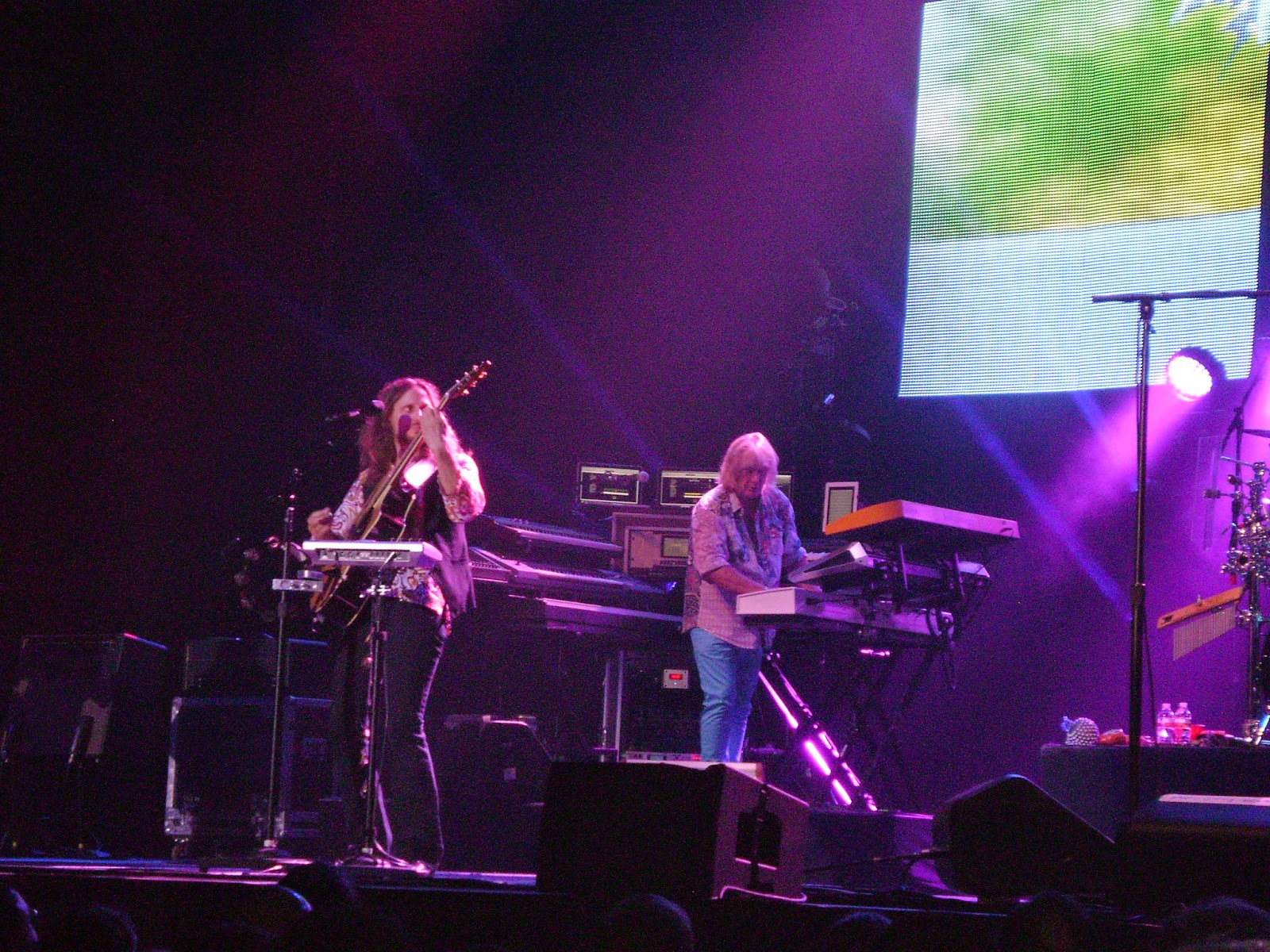 Yes is NOW on the road touring a new album called Heaven And Earth. I reviewed it for Classic Rock Radio (Dot EU) a week or two ago. Their set list is a celebration of its past, and a solid presentation of some new material. My only wish would be that they play MORE tracks than two from Heaven & Earth the next time around on tour. And for the third time, let me write about the evening.

The group started off the show by playing (in it's entirety) 1973's, Close To The Edge album. Would make a short list of favorite Yes albums if I had to write one. The stand out performer, in my opinion was Geoff Downes. He owned 'Close To The Edge' with his musical performance!! Of course the rest of the band shined as well.

The next two new songs were 'Believe Again', and 'The Game'. This not being my first Yes tour, I can say I always enjoyed seeing the band play new music. Sure I love the greatest hits, but it's always so cool seeing the members perform songs I have not seen them play before. My first Yes concert saw the band promote their newest album at the time, Relayer (1974). I've missed only a couple tours supporting new projects since then. I'm certainly more than a fly-by night fan.

One of the studio albums that made me such a big fan was 1972's Fragile. So it made me ecstatic to hear the group playing the whole Fragile album on the Heaven and Earth tour. This was worth the price of admission all by itself. It was my first time seeing two cuts from that record, 'Five Percent Of Nothing', and 'Cans and Brahms', played live. Fucking blew me away! I lived twenty years in New Jersey. No other way for me to say that. Thanks to Geoff and Alan (and the rest of the band) for that historic Yes moment for me. Cool lighting and projections throughout the songs made them all the better. Back to the band, they peaked for me playing 'South Side of The Sky', the newest members making the songs their own. This IS Yes !! For the band is not just a launch pad, or spot light for one or two individuals but a unified musical synchronicity. It's the musicians that make up Yes at whatever time that gave the music a signature sound. The music is unique and even when listening to what is  considered to be their weakest material by long time fans,  it stands out because of the caliber of musicianship involved. Two studio albums from the group's over four decades of existence include Tormato (1978), and Open Your Eyes (1997), come to mind for this reviewer as not exactly being their best works. Still, plenty of good moments.

The rest of the evening at the Yes show flew by. I had the greatest time along with my friend Charles Zittle (drummer for Houston band Generation: Landslide!). Was a solid evening of wonderful music. The warm up band Syd Arthur opened up for Yes. One has to be good to share the same stage in the same evening with Yes, and they were. So if possible, catch the tour. You'll be glad you did.

Oh...almost forgot. The official tour tee shirts found at the merchandise stand need to come in BIGGER sizes. I noticed at this concert, lots of people in the crowd between the ages of 40 and 60. Don't know about them, but I have three past Yes Tour tee shirts in LARGE, that because of my ever expanding belly, do not fit anymore. Future eBay items? At six foot and near 190 pounds, I really need EXTRA LARGE nowadays. So merchants, please take Uncle G's suggestion and try to have more EXTRA LARGE tee shirt selections available. Since you only had one that size, that's all I purchased. I would have gotten another if it would have fit me. Just saying. Besides that, great job!! Oh...and I like the autographed CD's and the coffee mugs. Try to keep those in stock.

Gary Brown
American Correspondent for Classic Rock Radio (Dot EU)
All Photographs taken by Gary Brown and remain in his ownership and are used by permission
Posted by Jon Kirkman at 20:17