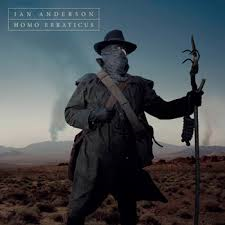 "Rock Cellar" says HOMO ERRATICUS offer songs that "address those same modern realities that give rise to my impertinent Why?, and in an honest, thought-provoking, entertaining manner.  Compared to whatever else is out there right now, that’s definitely an improvement."  "The strongest Ian Anderson album ever," writes Music Street Journal. Rolling Stone online states, "Ian Anderson—unlike many, many, many of his contemporaries—hasn’t really shown the signs of aging that most of us have taken for granted in our ‘60s-era pop stars."

In 2012 Ian Anderson released THICK AS A BRICK-2, the follow-up to Jethro Tull's legendary concept album, THICK AS A BRICK. TAAB-2 was a critical and commercial success, charting around the world. In April 2014 he returned with the hit album HOMO ERRATICUS which--according to BILLBOARD MAGAZINE--entered the UK album charts at number 14.

The original THICK AS A BRICK album, released in 1972, was based around the poem of disgraced child prodigy Gerald Bostock. For HOMO ERRATICUS Anderson is reunited with Bostock, using lyrics written by Gerald based on an old historical manuscript. The manuscript examines key events from throughout British history before going on to offer a number of prophecies for the future. Ian says the album deals with migration as a theme.

Suitably dramatized and exaggerated by Bostock as metaphors for modern life, he presented Anderson with ideas for 14 songs, which have now been set to music. The result is HOMO ERRATICUS. The CD / DVD tour edition of the album will be released on Anderson's own Calliandra Records label in conjunction with Kscope on September 30th.