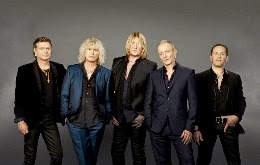 Rock legends DEF LEPPARD will perform the pre-game show at the first of this year’s three NFL International Series games on Sunday September 28, when the Oakland Raiders host the Miami Dolphins.

Def Leppard, who have sold 100 million albums worldwide in a career spanning three decades, will showcase some of their biggest hits before kickoff of the NFL’s ninth regular-season game to be played in London since the International Series began in 2007.

The band’s lead singer, Joe Elliott, said: “Having most recently visited Wembley in May to watch Sheffield United in the FA Cup semi-final, I know what the atmosphere in the ground is like for ‘our’ football so I’m really looking forward to performing there before the NFL game and of course soaking up the excitement of the actual match. I can’t wait!”

“Having Def Leppard perform at Wembley is going to very exciting and a lot of fun,” said Alistair Kirkwood, Managing Director of NFLUK. “We know their performance will get Wembley pumping, have the fans on their feet and set the tone for a great game.”

Formed in Sheffield, Def Leppard have been hailed as the UK's greatest-ever arena rock band. The five-piece – Elliott (vocals), Phil Collen (guitar), Rick "Sav" Savage (bass), Vivian Campbell (guitar) and Rick Allen (drums) – have produced a series of classic ground-breaking albums and two prestigious Diamond Awards in the USA, for two separate 10 million-selling albums. The group’s spectacular live shows and arsenal of hits have made them an institution in the music and touring industry.

The US national anthem, ‘The Star Spangled Banner’ will be sung before the Dolphins-Raiders game byISAAC SLADE, lead singer of The Fray. Four-time Grammy Award nominees, The Fray had their first UK top five single with “How To Save a Life” and have seen two of their four albums reach platinum status in the United States.

The UK national anthem will be sung by best-selling soprano LAURA WRIGHT, who performed ‘God Save The Queen’ at both of last year’s International Series games.

A limited number of tickets returned by the participating teams will go on sale at 10 a.m. on Thursday September 4 via www.ticketmaster.co.uk.