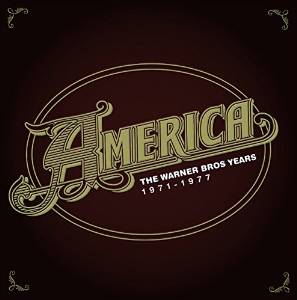 AMERICA: THE WARNER BROS. YEARS
Eight-CD Boxed Set Spans 1971-77 And Includes Seven Remastered Studio Albums
Plus America Live
Available from Rhino on July 17
The sound of America is unmistakable thanks to the inseparable vocal harmonies crafted by Gerry Beckley, Dewey Bunnell and Dan Peek on hits like “Tin Man,” “Sister Golden Hair” and the #1 smash “Horse With No Name.” The band recorded some of their most memorable records for Warner Bros. Records during an eight-album run that began in 1971 and lasted six years.
Rhino is bringing together every studio and live album the group recorded with the label for a new 8-disc boxed set- AMERICA: THE WARNER BROS. YEARS 1971-1977, which will be released on July 17.
To ensure the best sound quality, all of the music is taken from new 2014 audio masters. The set is presented in a sleek clamshell box with each album in a CD wallet that replicates all of the original album art and inserts. AMERICA: THE WARNER BROS. YEARS 1971-1977 includes: America (1971), Homecoming (1972),Hat Trick (1973), Holiday (1974), Hearts (1975), Hideaway (1976), Harbor (1977), and America Live (1977).
America hit the ground running in 1972 with its self-titled debut, which topped the album chart, sold more than a million copies and featured the trio’s signature hit “Horse With No Name,” as well as the Top 10 hit “I Need You.” The band’s follow-up Homecoming was also certified platinum and included another Top 10 hit, “Ventura Highway” with its chiming guitars. The third album, Hat Trick featured “Muskrat Love,” a tune that would later become a hit for Captain & Tennille.
In 1974, the trio released Holiday, which contained the Top 10 hits “Tin Man” and “Lonely People.” The gold-certified album was the first of several America would record with the Beatles’ producer George Martin. Hearts followed and included memorable cuts like “Daisy Jane” and the #1 “Sister Golden Hair.”
The group had always enjoyed great success on Adult Contemporary radio and that continued with “Today’s The Day,” a #1 hit from its sixth studio albumHideaway. In 1977, the band released the studio album Harbor, followed by its first live album, America Live, which featured performances of many of its most popular songs.
THE WARNER BROS. YEARS 1971-1977
Album Listing: